I’m so thrilled to have Brenda Hiatt visiting the blog today.  Brenda is a talented author, writing teacher, and romance industry advocate who’s had a successful career and written truly wonderful historical romances.  She’s also just published a mystery, which I’m really curious about.  Let’s find out about it, shall we?

You’re mostly known for writing historical romance, but you’ve just published a mystery with Bell Bridge Books.   Why the switch?

I cut my writing teeth on traditional Regency romances, publishing six of them with the Harlequin Regency Romance line (now long defunct, alas). When that market dried up, I tried a few other things, including one time travel, eventually published by Harlequin Superromance as BRIDGE OVER TIME. But it wasn’t until Mary Jo Putney took me aside at a conference and told me I should try Regency-set historicals that I took that step, which got me back into the game with SCANDALOUS VIRTUE at HarperCollins. I went on to write seven more single title historicals for HC and Avon, most of them Regency set. Unfortunately, after several tight deadlines in a row along with a couple of difficult life events, I frankly burned out. I didn’t write at all for more than a year, and when I did start writing again, I decided to write something just for me, about a woman having the kind of mid-life adventures I imagined myself attempting if I only had the nerve. That book became OUT OF HER DEPTH, which just came out in March from Bell Bridge Books. 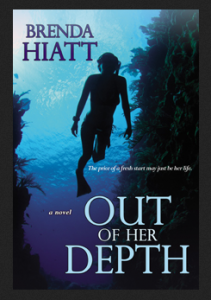 I never thought of it as a mystery while writing it, but that’s what they’re calling it, and I guess it fits. It’s about a woman reinventing herself, with lots of action and suspense and a big dose of humor along the way–along with a bit of romance, of course! It grew out of a vacation to Aruba and my own love of scuba diving, and was a heck of a lot of fun to write. Best of all, it got me writing again!

All genres and subgenres have their peaks and valleys, as one thing or another becomes the “hot” genre or type of story. But historical romance has always had a strong following, and I personally believe it always will. It’s true that some settings–time and place–are more popular than others, but one of the extremely cool things about the new publishing paradigm is that it allows even authors of the offbeat, “unpopular” (at least by traditional publishing standards) stories to find their readers, the people who love those exact books. It would be a boring world if everyone liked to read (and write) the same thing, wouldn’t it? For example, while my Regency-set books have tended to be my best sellers, I’ve gained some passionate fans with my American-set, “Titanic”-style romantic historical fiction novel, SHIP OF DREAMS, which relies heavily on the real events of the sinking of the steamship “Central America” in the 1850s.

You have so many wonderful historicals, but The Saints of Seven Dials series really caught my attention.  What can you tell me about those books, and do you have a favorite? 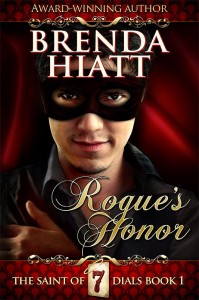 I confess, these books were originally inspired by two movies: Disney’s “Aladdin,” and “The Princess Bride.” Luke, the hero of the first book in that series, ROGUE’S HONOR, was my vision of the lad Aladdin (as portrayed at the beginning of that movie) all grown up–a gleeful, daredevil thief with a heart of gold, who had a special way with the ladies. By the time I finished writing that book, I had concocted the idea of a series, borrowing from the idea of the “Dread Pirate Roberts” in “The Princess Bride”–how everyone believes the legend is just one man (in this case, my Regency Robin Hood, the Saint of Seven Dials) when in fact there’s really a series of men going by that moniker, with each secretly handing over his mask to the next in line. A favorite? Hm. It’s always hard to choose a favorite book, since I tend to be in love with whichever one I’m writing at the time, but my first Saint hero, Luke, will certainly always have a special place in my heart. Though Noel is pretty yummy, too. And Marcus. And Lord Peter. Then there’s Jack, in SCANDALOUS VIRTUE . . . Nope, can’t do it. Sorry.

What’s up next in Brenda’s writing life?

At the moment, I’m hard at work on a young adult series, just finishing up the first draft of book 3. It’s contemporary, but with science fiction creeping in as it goes along, and I’m having a blast channeling my inner 15-year-old as I write these books! My Bell Bridge editor has hinted she’d like to see a sequel to OUT OF HER DEPTH, so that will likely be my next project when I finish this series. Meanwhile, I finally have the rights back to the last of my Harlequin Regencies, so I’m hoping to get those formatted and available as e-books in the very near future. If only there were more hours in the day!

I’ll be looking forward to reading your backlist!  And Brenda is graciously giving away a copy of Rogue’s Honor, one of her historical romances to one of my readers today.  If you could only take one historical romance with you on a trip, which one would it be?  One person who comments will win Rogue’s Honor!