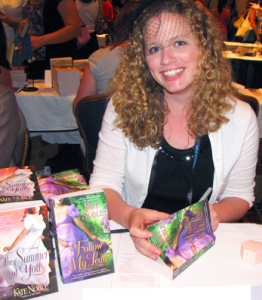 Those of you who stopped by the blog last week know that I did a feature on historical romance writer, Kate Noble.  I’m pleased to say that Kate is back on the blog today with an interview.  Pull up a chair, and let’s get to know her a little better!

What drew you to the Regency period as the particular setting for your novels?

I’ve always loved the Regency. I read Pride and Prejudice at the impressionable age of 15 and haven’t looked back. Since the Regency Era was mainly what I was reading, it makes sense that it would be what I started writing, right?

Also, the Regency is just jam packed with so much goodness. From Prinny to Beau Brummell to the Napoleonic Wars to Byron to Austen herself, the era is such a fascinating time for London – a sprawling city that was as old as Hadrian’s Wall but felt new, like it was bursting at the seams to grow.

Your new historical romance is out, and it combines passion, adventure, romance, and a little danger, too. Can you tell us a little bit about it? What gave you the idea for this book? 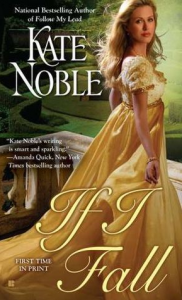 The idea from this book sprang from a slightly sad tale. Once upon a time, I got dumped. Don’t worry, I survived it, but recalling that time got me thinking – what would it take for someone in the Regency Era to survive getting dumped? What if it was a broken engagement? What if it had been to a duke? How could you ever go out in society again?

Well, Miss Sarah Forrester goes through all that (her heart cruelly broken at the end of my previous book Follow My Lead) and she not only survives, but she thrives! Reinventing herself as the Golden Lady, Sarah becomes the most sought after young lady of the ton, and the façade not only saves her socially, but keeps her vulnerable heart safe. The only person who can see through the façade is her childhood friend, Lieutenant Jackson Fletcher. And he will do anything – even dressing up as Sarah’s girlhood crush, the mysterious spy known only as the Blue Raven – to bring her out from behind the mask and back to the sweet and loving girl he once knew.

Too bad the real Blue Raven isn’t nearly as amused by Jack’s costume. Although he does need his help in solving a murder…

When you were writing the book, did anything surprise you? A bit of research, characters going off in an unexpected direction?

I’m always surprised by what my character end up doing and saying to each other – but sometimes the most interesting things are in the development of my secondary characters. Sometimes one random line makes the light bulb ding over my head and I think “Oh, that would make an excellent storyline for this other character’s book, next!”

Was there a model for your dashing hero, or did you pull him straight from your mighty brain?

Well, I sort of modeled him on Wesley from The Princess Bride with a dash of Captain Jack Aubrey from Master and Commander: the Far Side of the World. Although, in my head, he looks exactly like Taylor Kitsch. 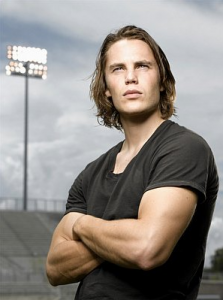 Thus he sprang forth from the depths of my mind and, after a quick lesson, began to swashbuckle with aplomb!

Thanks so much for being with us today, Kate!  And since you gave away books last week, I’d like to return the favor today.  I’ll give away two copies of my first book, Mastering The Marquess, to two folks who comment on the blog today.  I was thinking the other day about dinner parties and fun guests.  If you could sit next to anyone in the world at a dinner party, who would it be?  Feel free to select from the past or present.  I mentioned on facebook the other day that I’d love to sit next to Ellen DeGeneres at a dinner party.  I think she’d be a hoot!