One of my favorite authors is once again featured on the blog today.  She’s Elisabeth Naughton and she writes sexy romantic adventures, and hot and dangerous paranormal romance.  From the beginning, Elisabeth’s books have received tons of critical acclaim.  This is how the Chicago Tribune described her Stolen Series romantic suspense trilogy:

Yes, she does!  Her paranormal romance is fabulous too.  In fact, her next paranormal, Enraptured, just got a starred review from the prestigious Publisher’s Weekly:

“Filled with sizzling romance, heartbreaking drama, and a cast of multifaceted characters, this powerful and unusual retelling of the Orpheus and Eurydice story is Naughton’s best book yet.” 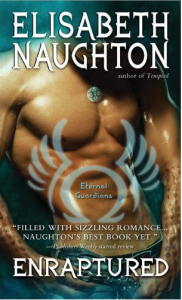 And can we just pause a moment to ponder that awesome cover?  *Vanessa fans herself*

Where was I?  I remember!  With Elisabeth’s latest book, always good news for her readers.  Like many top-notch authors, Elisabeth has moved into the world of digital publishing, this time with an emotional contemporary romance called Wait For Me.

Here’s the blurb for this intriguing story:

A woman without a past…

After a tragic accident left her with no memory, Kate Alexander struggled to fit in with a husband and world that didn’t feel right. She’s had no reason to question what friends and family have told her, not until her husband is suddenly killed and she finds a photo of a young girl in his office. A girl who can’t be anyone but a daughter Kate didn’t know she had.

A man desperate for a reason to live…

Ryan Harrison lost his wife in a plane crash five years ago. To cope with the pain of her loss, he dedicated himself to his job and to raising their daughter. Now a successful pharmaceutical executive, Ryan has everything a man could want—money, fame and power—but he’d give it all up in a heartbeat for just one more day with the woman he still loves.

Two lives about to converge.

As Kate begins to dig into a past she doesn’t remember, evidence leads her to San Francisco and puts her on the path toward Ryan, a man who sees in her the woman he loved and lost. Kate feels a draw to Ryan, one she can’t explain, but is that feeling enough to convince her this is where she’s supposed to be? As Ryan and Kate search for answers, they uncover lies long buried, a passion hotter than either expected and a danger that threatens…even now…when the second chance they’ve both been searching for is finally within reach.

Doesn’t that sound awesome?  And I’m going to give you a little flavor of Elisabeth’s book with this excerpt:

Ryan tossed his keys on the entry table and closed the front door behind Kate. She wandered into his living room without a word and stopped in front of the fireplace, where a series of framed photos of their life together still sat on the mantel. Their wedding photo, the day they’d brought Julia home from the hospital, a picture of the two of them on a hiking trip up one of those stupid mountains she’d always been dragging him to.

What did she think when she looked at those pictures? Did she feel anything? His palms grew sweaty. His stomach churned like it was set on the spin cycle of a washing machine.

Guilt slithered in as he watched her look from photo to photo, clamped on tight to his heart. Guilt for not looking for her when he should have. Guilt for what was happening now. Guilt over the fact someone had purposely hurt her five years ago and that it could possibly be because of him.

He raked a hand through his hair, knowing dwelling on that guilt wasn’t going to change anything. The only thing that mattered now was keeping her safe. “Are you tired?”

She turned to face him. Moonlight spilled through the picture window, illuminating her features. Those deep green eyes, the high-set cheekbones, that mass of curly hair that fell to her shoulders and which he ached to slide his fingers through. “Exhausted.”

Her tired voice was like velvet and sandpaper all wrapped up together. He wanted to hear her say his name in that same sleepy tone like she had so many times before. Wanted to pick her up and take her to his bed. Wanted to wrap her in his arms, slide inside her body, and block out the rest of the world.

But he knew he couldn’t. She still wasn’t sure of him. He’d been an ass to her when he’d first found out who she was, and now they both knew he was indirectly responsible for her accident. Her wariness was warranted, and he didn’t want to push her. As much as he wanted—needed—to touch her, he wanted her to want him back. Even if it was only a fraction of his want for her.

“Come on,” he said, gesturing for her to follow. “I’ll show you the guest room.”

He picked up her bag, the one they’d driven out to Moss Beach to get, and headed up the stairs. Her feet shuffled behind him, her sweet scent of lilacs drifted in the air. He hardened at just the thought of her lying in a bed down the hall from him tonight, so very close. So completely alive.

He pushed the guest-room door open, and when she eased by him, those silky strands of hair brushed his shoulder. His stomach clenched, and heavy tingling sensations shot straight to his groin.

“This is nice,” she said, turning a slow circle as she took in the pale blue walls, the white comforter on the queen-sized bed, the whitewashed furniture a decorator had picked out.

But nice wasn’t the word he was thinking of. Dressed in jeans and a fitted T-shirt, she was gorgeous. Curvy at her hips, tight through her legs and ass, and when she turned, the swell of her breasts tempted not only his body but his control. He’d had his hands on those luscious breasts earlier today, wanted his lips there now.

He glanced up and noticed her curious expression. “Sorry. Punchy. It’s been a long day.”

He set her bag on the bed, moved to open the adjacent door, and flipped on the light. Tried like hell to stop being so aware of every sound and movement she made. Couldn’t. “Bathroom’s through here.”

“Did I live here before?”

The soft-spoken question drew him around. What would it be like not to remember who or what you were? To have to rely on others to fill in the gaps? For the first time since she’d come back into his life, he realized how hard this must be for her.

He checked the urge to reach out to her and instead shoved his hands into the front pockets of his jeans. “No. I bought this house about four years ago.”

She ran her hand over the blue-checked bedspread. He wished she’d touch him like that, couldn’t help but remember the way heat had sizzled all along his skin when her hands had brushed over him earlier in the day.

“Where did we live before?”

“We had a place in the city. After you…left…I couldn’t stand being there by myself.”

“Oh,” she said again. On a deep breath, she dropped her hand and looked at her feet.

Talking about the past wasn’t putting her at ease. And he didn’t want her uncomfortable. He went into the bathroom and pulled towels out of the linen closet, then set them on the counter. When he made his way back out into the bedroom, she was already going through her bag.

Her face was drawn, her mascara smudged under her eyes. She looked like she could nod off to sleep at any moment. “I guess I’ll just let you get some rest, then.”

“Yeah?” He stopped at the open door, glanced back.

“For this…for putting you out.”

She shook her head. “Yes, I am. I’m sorry about all of this. I shouldn’t have come to San Francisco. I didn’t stop to think about how this would affect anyone but myself. I’ve sucked you into this nightmare. I’ve caused nothing but confusion and heartache for Julia and Reed. And now I’ve put Simone and Shannon in danger.”

“You didn’t do anything wrong,” he said softly.

“Yeah, I did. I told myself I had to know the truth. Now…” She lifted her arms, dropped them in defeat, and sank down onto the edge of the bed. “Now, I’m not so sure I want to know anymore. Maybe it would just be better if I packed up and left.”

A knot twisted in his stomach. Panic pumped through him. He wouldn’t survive it if she walked out on him now. Losing her the first time had broken him. A second time would kill him.

He knelt in front of her, knowing if he touched her, he wasn’t going to be able to stop. But he needed that connection, needed to show her how much she meant to him. With shaking fingers, he clasped her hand in her lap. “You can’t leave now.”

Her eyes were full of anguish and remorse. The sadness he saw there tightened his chest to painful levels. He ached to wrap his arms around her and pull her close, to take away the pain for both of them.

“You can’t possibly tell me any of this is what you want,” she said quietly.

“I don’t want this mess, no. But in some insane way, it brought you back to us. I wouldn’t change it now for anything. What I want is to see you smile again, to figure out a way to make this easier for all of us. Walking away from me and the kids isn’t going to do that. It’ll just make things worse.”

Hearing the crack in her voice did him in. He could see himself pushing her back on the bed, tugging her clothes off, pressing inside her and driving the worry away. Wanted that so bad he could barely breathe.

Gently, she pulled her hand from his and ran it over her hair. “I’m just tired and not thinking clearly. I need some rest.”

Reluctantly, he pushed to his feet. “Okay. I guess I’ll see you in the morning.”

She smiled when he didn’t move. Not a seductive, made-for-him grin, but a forced, uncomfortable curl of her luscious lips that said it was way past time he left.

He pulled the bedroom door closed behind him, then gripped the handle for support. And alone in the empty hall, he closed his eyes and rested his head against the door. Everything he’d ever wanted was inside that room, and he didn’t know how to get it. Every move he made was the wrong one. Each step he took seemed to push her further away instead of draw her closer. Was he fooling himself into thinking he could ever win her back?

He sure the hell hoped not. Because he knew for certain he’d never survive losing her again.

Vanessa, here.  Doesn’t that book sound great?  Please check out Elisabeth’s website for details on Wait For Me, and for info on all her books.

For my readers today, Elisabeth is giving away a digital copy of her book, Wait For Me.  Just tell me which genre you prefer – contemporary romance, paranormal romance, or romantic suspense for a chance to win a copy of Elisabeth’s book!