Thanks to everyone for stopping by the blog.  My featured author tomorrow is Elisabeth Naughton, who writes fab paranormal romance and romantic suspense novels.  Be sure to stop on by! 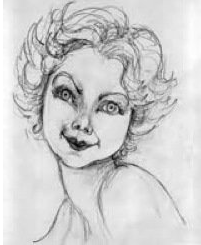 And here’s the blurb for this exciting series:

The Protectors—three men, closer than brothers, who looked after each other growing up in a brutal foster home and have had each other’s back ever since. Sam Reston, Harry Bolt, Mike Keillor. Hard men, tough men, who grew up rough and who saw brutality and cruelty close up—particularly to women and children. The instant they were legally able, they took off. Sam to be a SEAL, Harry a Delta Operator and Mike a Marine. Now they run a highly successful security company with a secret side to it—an underground railroad they run to help abused women and children disappear.

They’re making money hand over fist with their new company because they are very good at what they do. But make no mistake—it’s their ability to take women and children away from the heart of darkness and set them up in a new life that makes it all worthwhile.

When each man meets his mate, that protective instinct goes into overdrive.

Doesn’t that sound awesome?  The first book in the series is Into The Crossfire, which introduces the first of three super-hot, alpha males protectors willing to walk through fire for the women they love. 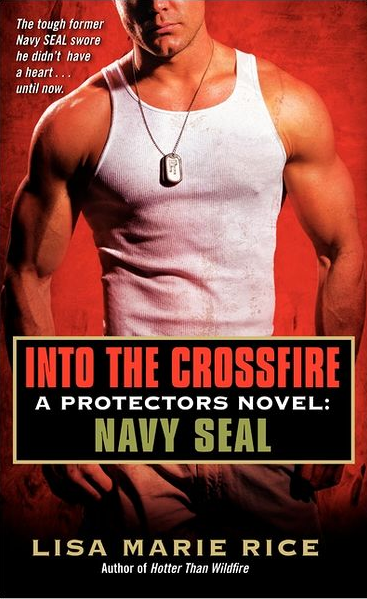 The second book in the series is Hotter Than Wildfire, which was released by Avon Publishing in April.  It got great reviews, including this one from Joyfully Reviewed, who labelled the book as one of their Recommended Reads:

HOTTER THAN WILDFIRE is Lisa Marie Rice at her best. Everything I’ve come to expect and love about her writing, HOTTER THAN WILDFIRE delivers. An exciting storyline with a ruthless villain whose pursuit takes him to the edge of sanity, the man capable of stopping him, and a woman strong enough to face the obstacles in her way keep you on the edge of you seat, while Harry and Ellen’s intense romance will sweep you off your feet.

Lisa would be the first to tell you that she loves to create heroes modelled on the brave, amazing men in the Special Forces units of the military.  In fact, she has a really cool post on her website about Navy SEALS, and why she admires them so much.  So you won’t be surprised to read that she has a new release out this month which features a Navy SEAL as the hero.  It’s a digital novella called Fatal Heat, and it went on sale Oct. 4 from Avon Impulse. 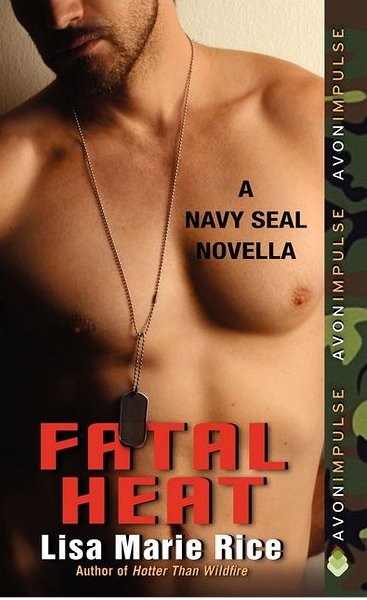 Here’s the blurb for Fatal Heat:

Former Navy SEAL Max Wright is out of the SEAL Teams forever after being almost killed by an Afghani RPG. He retreats to his former XO’s beach house to lick his wounds. He wants to snarl at the world but finds it hard to snarl at his new neighbor, his XO’s beautiful goddaughter, Paige Waring, who also comes with a ridiculously likable, totally undisciplined dog.

As a plant geneticist, Paige has always been focused on her work, but when she and her dog run into Max, she recognizes the lonely, shattered man behind the rugged exterior. To her mind, sexiness always comes with a white lab coat, not with acres of tanned muscle and a tough mind-set.

When Paige’s work becomes the target of criminals and she’s abducted, Max springs into action. Though still terribly wounded, this tough as nails SEAL goes on his last mission—stopping at nothing to save the woman he loves.

I am SO there!  This novella has everything I love in a contemporary romance—a strong but wounded hero, a smart heroine, danger, and lots of steam.  The fact that there’s also a loveable, nutty dog is definitely a bonus!

If you like your romantic suspense with a lot of heat, then I strongly suggest you hop right on over to Amazon or Barnes & Noble and check out Fatal Heat.  And while you’re browsing the internet, be sure to stop by Lisa’s website.  Aside from being a wonderful writer, she’s a fascinating person.  Make sure to read her FAQs, which are both fun and informative.  And don’t forget to check out her Books page for the list of all her fabulous, sexy books!

To celebrate her new release, Lisa will give away one copy of Fatal Heat to one of my readers.  Just tell me what’s your favorite type of hero for contemporary romance—do you love those strong alpha males like Navy Seals (I sure do!), the ordinary good guy, the bad boy in need of reform, or the brainy professor type?  One person who comments will win a copy of Lisa’s novella.