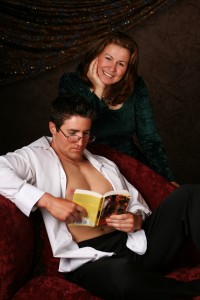 I’m always happy to welcome fellow Kensington author Diana Cosby back to the blog.  Diana is a best-selling author of Scottish medieval historical romantic suspense, whose books have won awards and a great deal of acclaim.  She’s here today to tell us about her new book.

His Enchantment is book six in your bestselling MacGruders Series.  Is it a bit different from some of the other books in the series?

Hi Vanessa, and my sincere thanks for having me back on your blog, always fun being here.  🙂  Yes, His Enchantment is unique in several ways, including the fact that it’s a prequel, like they had in the Star Wars series.  His Enchantment is the much awaited grandmother’s story. In addition to the love story, the reader learns how her chamber in Lochshire Castle came to be and where it’s special powers came about.  Plus, the reader discovers how the halved stones within the bowl came to be, the origin of the myriad of intriguing gifts in the castle we are introduced to during the series,  and how the family division began.  I loved writing His Enchantment, and I sincerely hope my readers enjoy Trálin and Catarine’s story as well! 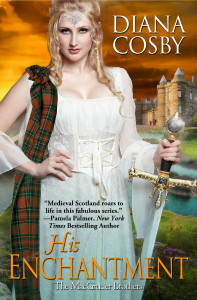 Did you find it a challenge to weave together historical and paranormal elements, particularly in an existing series?

That I added paranormal elements to His Enchantment as well as historical facts along with drawing together the how’s and whys of questions raised during the MacGruder Brothers series proved to be an interesting challenge, but one that I loved.  As with every book I’ve written, I’m not quite sure how I’ll figure everything out, but through the magic of story, somehow it all comes together by The End.

What is it about Highland romance that readers love so much?

I think readers enjoy Highland romances due to the depth and passion of the characters who fight for what they believe in as well as the rich history, and the amazing surroundings of the Highlands.   The kilts are an added bonus!

What can you tell us about your work with the International Food Bank Drive?

I firmly believe that each of us can make a positive difference in others lives.  I support many charities, and one that I’m trying to help raise awareness for is our food banks.  A warm meal and a kind word can go a long way in helping someone who is trying to overcome life’s challenges.  It’s more than a meal, but donations from the community that let the person that they’re supported by those around them. 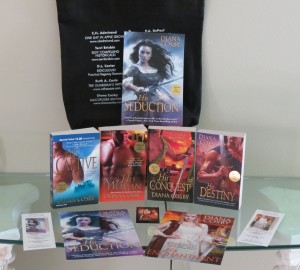 Starting on the 1st of November, when you donate to a local food bank, post on my Facebook page or Facebook Fan page, beneath the daily International Food Bank Challenge post, add your donation along with your name and contact information.  On December 5th I will use www.random.org to draw from all of the names of people who donated that I received. The winner will receive an autographed set of the bestselling MacGruder Brother series to date; His Captive, His Woman, His Conquest, His Destiny, and His Seduction.  I will sign the set, then send them priority to whoever you want to make a personal holiday present.

That’s an awesome thing to do, Diana!  And thank you for joining us today.  Readers, Diana is giving away a copy of His Captive, the first book in The MacGruders Series.  For a chance to win, just tell which is your favorite movie from the Star Wars movie series.  One person who comments will win a copy of Diana’s book!