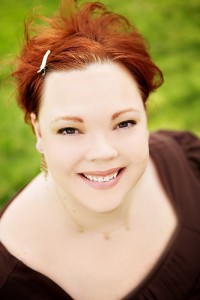 One of the best things about reading romance is the opportunity to discover debut authors–writers who bring something fresh to the game, and who take some of those tired old tropes and stand them on end.  I have one such debut author featured on the blog today:  historical romance writer Heather Snow.

Heather, interestingly enough, has a degree in Chemistry, but she discovered she much prefers creating chemistry on the page rather than in the lab.  I love that!  She also says it’s a challenge to wrangle her left and right brain to work together, but she fortunately loves challenges…she just goes about solving them analytically.  Well, the results of her experiments in developing chemistry between her hero and heroine have certainly paid off in her debut book, Sweet Enemy. 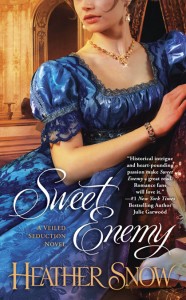 Heather’s book has only been out for a few weeks, but it’s already garnered an impressive list of reviews, including this one from BookPage:

“Sweet Enemy pairs a strong, independent heroine with a compassionate, politically active hero. The heroine’s unique knowledge of chemistry provides for some interesting twists, which combine with a solid plot, well-developed characters and deftly drawn setting to make an excellent first novel. Readers will be delighted to add Ms. Snow to their list of must-read authors.”

And how about this one from The Book Reading Gals?

“Whenever I read a debut book from an author I go into it a bit excited and a little hopeful that I will have found a new favorite, only to be disappointed too many times to count when it did not quite hit the spot for me. Well I am happy to say this is not one of those times! I picked up Sweet Enemy and at first thought it sounded a little familiar but that feeling ended after page 3, the next thing I know I am almost done with the book, could not put it down!”

Geoffrey Wentworth, a war hero and rising political star, never wanted to be the Earl, but when his brother dies, he knows his duty—take up the responsibility for his family’s estates.  His mother’s definition of duty differs from his, however, and can be summed up in one word—heirs.  When Geoffrey rushes home to answer her urgent summons, he finds himself host to a house full of women, all vying to become the next Countess of Stratford.  But his love is Parliament, where he wields his influence and reputation to better the lives of ex-soldiers, until a tempting houseguest and a secret from his past threaten his freedom…and his heart.

Liliana Claremont, a brilliant chemist, doesn’t want to be any man’s wife, much less a countess.  If she had tuppence for every time she’d been told her place was filling the nursery, not experimenting in the laboratory, she could buy the Tower Bridge.  However, when she receives a coveted invitation to the Earl’s house party, she trades in her beakers for ball gowns and gladly takes on the guise of husband hunter—for the chance to uncover what the Earl had to do with the murder of her father.

Liliana believes the best way to get the answers she needs is to keep her enemy close, though romance is not part of her formula.  But it only takes one kiss to start a reaction she can’t control…

Doesn’t that sound fabulous?  I love the fact that Heather’s heroine is a chemist!  To read an excerpt of Sweet Enemy just hop on over to Heather’s website, where you can also watch her book trailer.  While you’re there, be sure to check out the other stops on her blog tour.  Heather is a lovely person, and I think you’ll enjoy spending time with her!

For my readers today, Heather is giving away a copy of Sweet Enemy.  After watching the conclusion of Downton Abbey last night, I’m definitely in the mood to talk about historical clothing.  Didn’t you just love the outfits on the women of Downton?  So, tell me what your favorite period is for clothing–one person who comments will win a copy of Sweet Enemy.