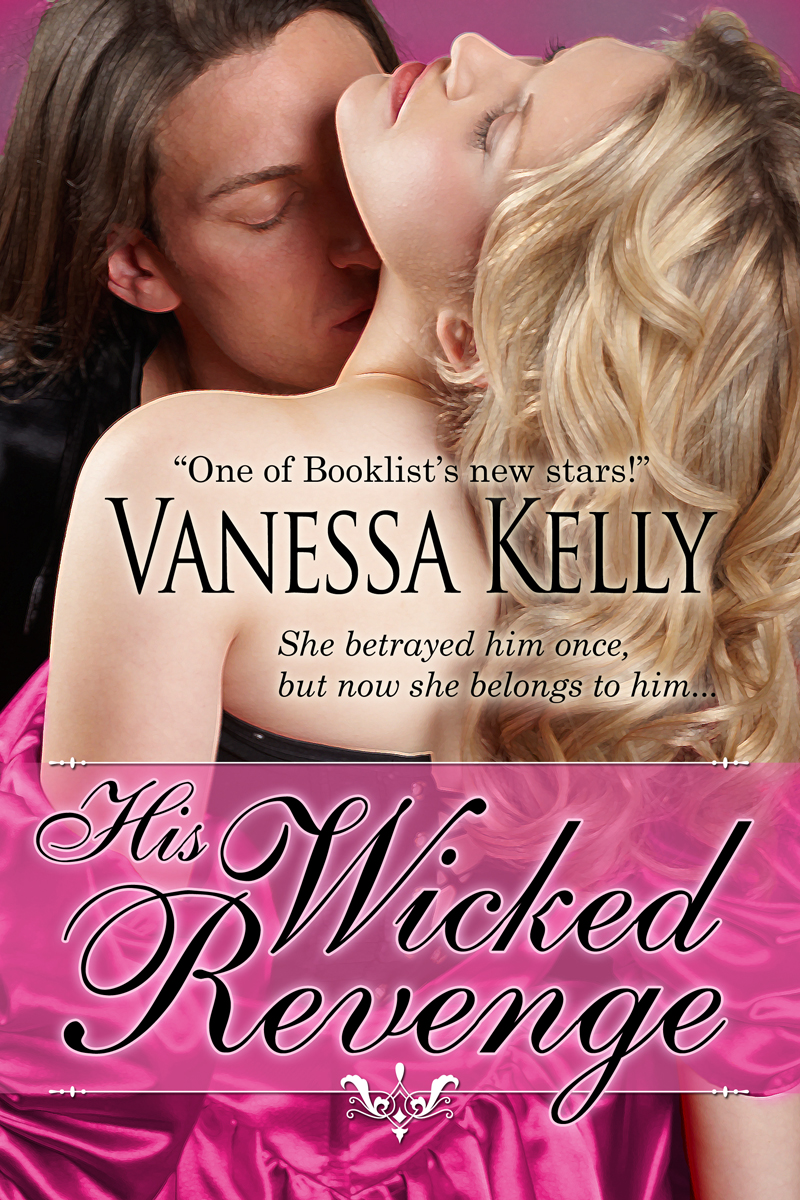 For #SampleSunday, I’d love you to read an excerpt from my Regency short story, His Wicked Revenge.  Captain Anthony Barnett has roamed the seas for thirteen long years, seeking his fortune.  Now he’s finally returned to London and to the woman he could never forget…

It started with a woman and it would end with a woman.  This women.  The one Anthony Barnett had been dreaming about for thirteen years.  The same one who would now be the instrument of his revenge.

Lady Paget—Marissa, to her close friends and family—studied his somber office, taking in the dark, heavy furniture and the stacks of bound shipping ledgers.  She looked everywhere but at him.

Not that he could blame her.  His summons, directed to her brother, Lord Joslin, had been carefully worded.  But the threat had been clear, nonetheless.  Marissa was to appear in Anthony’s office at Nightingale Trading by noon today or else the entire Joslin family would suffer the consequences.

Anthony maintained his silence, knowing the victory would be sweeter when Marissa finally came to him of her own volition.  Step by reluctant step. She had already made the first one by coming to down to his warehouse on the docks.  The next would be when she worked up the nerve to look him directly in the eye.

The long case clock by the door ticked out the seconds as she inspected everything in the room worth inspecting.  But eventually, like a disobedient child dragging her feet, she slowly lifted her gaze to meet his.  Her pale eyes, the color of a summer sky over the Indies, fixed on him with reluctant attention.  A hint of shame pooled in those cool blue depths.  At the sight of it, a grim satisfaction settled in Anthony’s chest.  She could no longer ignore him, and had now stepped willingly into his carefully-laid trap.

Marissa was finally where he wanted her, or, at least she would be very soon.  And there wasn’t a damn thing she could do about it.

“The light is poor in this room, but I think you are greatly changed,” she said in a flat, toneless voice.  “I hardly recognize you.”

He frowned.  What had she expected?  The last time she had seen him, he’d been nothing more than a callow youth, and a weedy one at that.  Years spent at sea had toughened him—hardened him in ways she couldn’t imagine.  But he could say the same for her.  She had changed as well, and in ways he had not expected.

She still retained the feminine power to command his complete attention, of course.  But Marissa had always chattered and sparkled like a rippling brook, full of laughter and mischief.  Now she was subdued, even colorless—a muted reflection of her youthful self.

Reluctantly, he recalled the last time he had seen her, on that night when his life had come to both a beginning and an end.  She had been full of life and beauty—so joyously in love that his heart had well nigh burst with glory of it.  The beauty remained, with her tall, slender figure and hair spun from moonlight.  But the glow that had lit up the world—well, his world, anyway—had faded.  Now her allure had an unearthly, remote quality to it.  Lovely but cold, like an Alpine lake before the spring thaw.

Anthony moved from his post by the window overlooking the docks and his small shipping empire.  He prowled across the room, coming to a halt in front of her, deliberately crowding her against a bookcase.  This close, he could smell her perfume—faint, and scented with jasmine—and the sweetness that was always Marissa.  That, at least, had not changed.  His body recognized the subtle scent, responding with a flash of heat and a quick sharpening of all his senses.  Almost unconsciously he leaned into her, wanting more.

She flinched and took a step back.  Anthony frowned.  Marissa had never cowed before anyone, not even her father when he was in one of his towering rages.

He waged a brief internal struggle to ignore the impulse—long and lamentably ingrained—to protect her.  She had forfeited such a right years ago, and his current plans called for exactly the opposite.

“Lady Paget,” he said.  “Please sit down.  I’m sure you’re as eager to begin our discussion as I am.”

She muttered something under her breath and stepped around him to the hard cherrywood chair in front of his desk.  With a spine as straight as an oak mast, she perched on the edge of the seat, looking as anxious as if she were facing a roomful of Barbary pirates.

Well, he wasn’t a pirate, but he was her first lover.  The man she had sworn to love forever but instead had betrayed—breaking all the vows they had made so many years ago.

His Wicked Revenge is available on Amazon, and at Smashwords and Barnes and Noble for only 99 cents!

8 thoughts on “#SampleSunday: His Wicked Revenge by Vanessa Kelly”