I’m happy to feature Denise on the blog today, and one of her latest books, Blackout.  Here’s the blurb for this paranormal romance:

The house at the end of the street has always been haunted. When a solar flare challenges the world to remain civilized, one man and one woman will face an evil lying in wait for all who dare enter…

Cassie Kovac has spent the last ten years rebuilding her life after witnessing her abusive husband commit suicide, and surviving a tsunami. She’s vacationing in the high mountain town of Bowmount, Colorado when a solar flare takes out the grid. Fear tears apart the little community, and the only thing standing between her and certain disaster is a man with a cloudy past.

Ex-marine Neal “Griff” Griffin’s life is shadowed in darkness. He won’t talk about his mysterious past. His childhood was marred by the unspeakable, his life spent erasing things too horrible to dare remember. Until he sees Cassie, and primal male instincts to protect come to life. When the world goes to hell, he realizes he’d do anything to protect her.

When Cassie and Griff face the haunted house, they don’t expect the building to come alive with a personality all its own. Fighting against the unknown threatens to rip apart the fabric of their minds, and make their survival and new love one step closer to impossible.

Man, don’t you love a good haunted house story?  Especially when you have a hot ex-Marine to help out! And I love the whole element of an isolated town and a solar flare taking out the electricity grid. 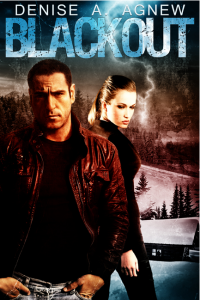 Here’s an excerpt from the book:

They settled at a big round table with an umbrella near the back entrance to the resort. Since the umbrella shielded them from direct intense sunlight, she took her hat off and shook her hair out. She felt Griff staring at her, but his sunglasses were so dark she couldn’t see the expression in his eyes. Eager to talk, she unzipped the backpack at her feet and retrieved her sketch pad.

She opened it to the roses, and shoved the pad across the table toward him. “McPhee had a strong reaction to these roses. He asked me where I’d seen them, and I explained that I saw them at the house.”

He drew his sunglasses off and lay them on the table. “I’ll be damned.”

He looked up at her. “When I went down the hill I was curious about the house. I wanted to understand why the roses are blooming one day, dead the next, then alive again.”

She gave him a sardonic smile. “You didn’t just leave because you didn’t want to answer my questions about your past?”

“That too.” He tapped the sketch of the rose with his index finger. “But the roses, the house pulled me there. I went there because I was curious.”

“Not because you feel there’s anything, well, weird about the place?”

“You know.” How could she say this? She decided coming out with the bald truth would work best. “Haunted?”

“You believe in the paranormal?” His tone was laced with disbelief and maybe a tad scorn.

“I’m a skeptic for the most part, but there are things have happened to me that aren’t easy to brush off.”

He stared at her a long time before ducking his gaze to the sketch of the rose bushes. “What makes you think the house is haunted?”

“Why did you want to go back there?” She persisted. “Was it just because you were curious about what we both saw? Or was it because you didn’t want to argue with me?”

He rolled his eyes. “Cripes, Cassie, you are a bulldog on the questions.”

He puffed air out between his lips. “Like I already said. I was curious. And before you can ask, no, I don’t believe in the paranormal.”

“Because you’ve never experienced anything you couldn’t explain?”

“I didn’t say that. I figure there’s a logical explanation for everything. Just because we can’t come up with one right now doesn’t mean it’s all woo-woo.”

She shifted in her chair, sinking down farther to get more comfortable. Unfortunately the hard wood didn’t give an inch. “Okay, do you have any theories?”

“Yeah. Someone moved in there since Sunday.”

She sensed he was hiding something again, leaving her in the dark. “What happened when you went down to the house by yourself?”

He kept his gaze on the sketch pad, flipping to the picture of the Point she’d drawn on Sunday and the one she’d drawn today. “Like I said before, I walked down the driveway and checked out the rosebushes. I didn’t see tire tracks, but it looked like they’d been run over.”

“Do you think Dougray did it?”

“No.” She drew her hands through her hair, wishing she’d tied it into a ponytail this morning. “Did you see anyone else at the house?”

When his gaze met hers, she saw confusion within him. “You could have cleared up the mystery of the possessed roses if you talked to the people who’ve moved in.”

“I don’t think anyone was home. The house felt empty. But not.”

That statement threw her. “Okay, now you’re freaking me out. What do you mean by it was empty but it wasn’t?”

He made a sound of contempt down in his throat, a sort of growl. “I don’t know.”

She smiled to take the sting out of her next words. “Sounds woo-woo to me.”

“When I was in the sandbox my instincts kept me from getting my ass shot off on more than one occasion.”

“Iraq and Afghanistan. I believe in instinct. Nothing paranormal about that.”

She almost refuted his statement, but decided if she wanted him to reveal more of his thoughts and past, she couldn’t antagonize him repeatedly. They went quiet for a short time while she sipped at her water.

He closed her sketch pad and tapped the cover with his finger again. “I suggest we just forget McPhee’s problems and weird-assed roses at that house. But I think he’s right. You shouldn’t go back to the Point. Especially not alone.”

A chill rippled just under her skin. “I have no plans to go up there alone, especially when Dougray keeps turning up everywhere I am.”

Satisfaction filled his face, and for the first time in a while, he looked relaxed. “Good.”

Once more the quiet enveloped them. Only the whispers of a light breeze and birds chirping interrupted their quiet.

He stood slowly. “I have an idea. Penny seems like an A-number-one gossip. Maybe she can tell us something about the house.”

She grabbed her pack and water bottle, enthusiastic about his idea. “Now that makes sense. Hey, I think I’m starting to like this little mystery.”

He came around the table and stood close to her. “Don’t get too excited. Little towns like Bowmount are good at keeping secrets when it’s dirty laundry.”

He left her long enough to toss his empty water bottle and hers into the recycle bin nearby, then crossed the short distance to return. As he walked, his powerful male body called to her libido in a way no man had in years. Maybe ever. He was a mystery she might not solve, but that didn’t mean he didn’t continue to intrigue her on several levels. She didn’t like that at all, but she could control sexual urges as well as the next woman.

He stood close again, looking down on her. His gaze was interested, a melting heat that warmed her from the inside out. With him so close and what had happened yet today, her emotions responded. She couldn’t deny the constant tug and retreat within her when this man got close, or when he spoke to her in that low, sexy voice.

“Thank you for coming back from the house. Back to the Point,” she said.

His eyebrows lifted slightly. “You thought I wouldn’t come back?”

“It crossed my mind.”

She laughed, genuinely amused by his assessment of himself. “I don’t think you’re that rude.”

His smile faded, his mouth compressed in a stern line. “I should have taken you with me. I wanted to give us both time.”

“I know. But you’re still not going to tell me anything about your past, are you?”

He bit his lower lip for a moment, and her attention caught on his well-cut, masculine mouth. “It’s a complicated past.”

“What do you think will happen if you tell me?”

She watched his face change from certain to uncertain, maybe confusion. “You’ll hate my guts.”

Well, I’m hooked!  And for my readers, Denice will be giving away a digital copy of one of her books – reader’s choice.  Just tell us if you like to read scary books or watch scary movies!  And don’t forget to check out Denise’s website for the scoop on her many books, and for buy links.