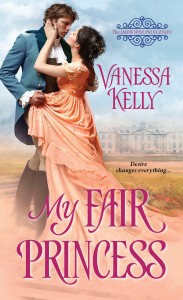 MY FAIR PRINCESS is book one in my new series, The Improper Princesses (out in August). These books are spin-offs from my current series, The Renegade Royals, and feature three young women who are the illegitimate daughters of England’s Royal Dukes.

So how about a Q & A about MY FAIR PRINCESS or the new series? You can comment and leave a question right here, or you can pop over to my facebook page to leave a question, where I’m also running a giveaway.

To get you started, here’s a snippet from the book. My heroine, Gillian, is taking a sedate stroll in the park with my hero, the Duke of Leverton, who is trying to teach her to behave like a proper English lady…

He steered her to a small enclosure next to the dairy, where a few cows ambled about and grazed. “There’s something I need to ask you first.”

Gillian lounged gracefully against the fence, negligently swinging the muff that dangled from her wrist. Charles made a mental note to work on her posture at another time.

He repressed a sigh. One problem at a time.

“It’s not an easy topic to discuss,” he said, “and I have no wish to embarrass you. But since we’re already talking about dukes, I thought I’d better ask you about . . . ” He hesitated, searching for a delicate way to phrase it.

“My esteemed father, His Royal Highness the Duke of Cumberland? Is that what you want to ask me about?” She still leaned casually against the fence, still swinging her purse. But the air around her now seemed charged with tension.

“I know it’s awkward,” he said. “But I need to know how things stand with him.”

“It’s not awkward for me at all,” she said in a cool voice. “Surely you know that I’ve never met the bastard.”

“Oh, wait,” she said in a musing tone. “I forgot. Technically, I’m the bastard, not my natural father. I suppose I shouldn’t confuse the point.”

Charles resisted the impulse to rub his temples. He could sympathize with her feelings about her father, but her near-fatal inability to guard her speech would surely be her undoing. Though Cumberland was not a popular man, he was a royal duke. The sins of the father would be visited upon the child if she didn’t learn to hold her tongue.

“I readily understand your feelings, but might I suggest that you refrain from using such terms to describe him?”

“How about poltroon, then? Or loose fish? Oh, I know—complete bounder. Will any of those do?” She smiled brightly at him, as if she were trying to be helpful.

“I would suggest Your Highness, or perhaps sir, if you are forced to address him or refer to him. I’m hopeful that you won’t be placed in such a position, but we must be prepared for it. While it’s unlikely that you’ll ever be introduced to him, you may one day find yourself at a ball or social event where he’s present.”

Gillian stood up straight. Anxiety darkened her big eyes as she glanced down the path toward her mother. The contessa had paused to speak with two little girls on an outing with their nursemaids. “You’re worried about what people might say to me about him, aren’t you? That if they make mean-spirited remarks, it will set me off.”

“People can say whatever they want about him—or me, for that matter. I’m used to it.” Gillian gave him a rueful smile. “And despite what you may think, I do know when to hold my tongue. My grandfather saw to my tutoring in that regard.”

Charles could believe it. From what he’d known of Lord Marbury, those lessons would not have been easy on her. It had been no secret that he’d vehemently objected to his daughter’s decision to keep her illegitimate child, and that the earl had been furious that the resulting scandal had forced them to leave England. Even though he’d subsequently gone on to have a distinguished career as a British diplomat in the Kingdom of Naples and Sicily, Marbury had never forgiven either his daughter or his granddaughter for subjecting the family to such humiliation.

“It’s a useful skill, even if the learning of it is often painful,” Charles said quietly. “I, too, had to learn how to curb my tongue. I won’t pretend it was easy.”

She threw him a sharp look, as if weighing his statement for truth. Then she nodded. “I didn’t like it much either. And I have to admit that I sometimes forget the lessons.” She huffed out a quiet laugh. “With predictable results, I’m sorry to say.”

His sympathy stirred. Gillian could be brash, but she also had a sweet, self-deprecating manner he found enormously appealing.

“The best way to handle gossip or ill-mannered remarks is to feign ignorance,” he said. “Simply give a vague smile and excuse yourself from the discussion.”

“You mean I shouldn’t plant them a facer or threaten to shoot them?” she asked, opening her eyes wide.

“I know it’s hard to fathom, but Englishwomen don’t generally engage in fisticuffs or duels.”

“How boring of them. I suppose I’ll have to find other ways to avenge myself on the gossips of London.” She lifted an eyebrow. “What do you think of poison?”

Want more info and a full excerpt? Check out the MY FAIR PRINCESS book page, along with my special Renegade Royals short story offer!