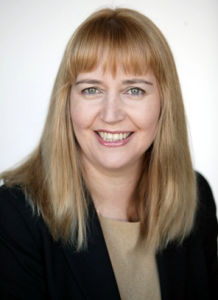 I’m thrilled to have romance writer Bronwen Evans guest hosting on the blog today.  She writes fabulous, award-winning Regency-set historical romance, and her books have garnered much well-deserved acclaim.  Today, Bronwen is talking about romance series and why we love them, both as readers and writers.

Although I’m a romance writer, I’m also a ferocious romance reader, and a fabulous romance ‘series’ wins hands down when I’m looking for something to read. I don’t know what it is about a series, I suspect it’s that I get to spend a bit longer with my favorite characters.

So, it’s probably no surprise that I also love writing a romance series.

Last year, I wrote a long novella series called, Wicked Wagers. Three notorious rakes, and three determined ladies, collide in this set of three linked Regency romance stories, all based around a series of scandalous dares, wagers, and challenges. The trilogy stories are available in separate eBooks, or you can buy Wicked Wagers, The Complete Trilogy eBook and it’s also now in book format (Amazon only). 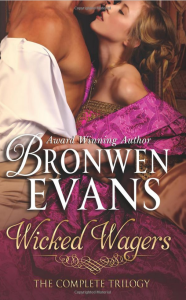 Writing a series book isn’t as easy as some believe it to be.  At the end of book one, I’ve set a reader’s expectations, and as the author, I must strive to maintain the momentum created in book one. So it was particularly nerve-wracking when the first story in the Wicked Wagers trilogy, TO DARE THE DUKE OF DANGERFIELD, was a Top 5 Finalist in the Kindle Book Review Indie Romance Book of the Year 2012.

Then you have to write book two! I was focused on not disappointing my readers, while remembering to remain true to my characters. Story two, Marcus’s story, TO WAGER THE MARQUIS OF WOLVERSTONE, is a bit darker. I had to ensure he was still the tortured, and pain-filled rake he was in book one. As I’ve had several Top Pick reviews for Marcus’s story, I think I managed to hold the readers interest and still stay true to his dark and tortured nature.

Story three, TO CHALLENGE THE EARL OF CRAVENSWOOD, was always going to be both sad and a joy to write. Henry was such a loveable rogue, and the only hero in the series who was desperately looking for love. Such fun!

While it could be considered risky to write a series, the rewards far outweigh the risks. I love how readers get completely embroiled in your characters and their world. That is all the reward I need. I found it really sad to write Henry’s story as it was the final book—did I say final? Already readers have asked me for more books in this series, and they’ve given me some great ideas (did I mention I love feedback?).

I hope you’ll check out my Wicked Wagers Trilogy. I’ve detailed each of the books below. To Dare the Duke of Dangerfield is on sale at the moment for $0.99.

Tell me why you enjoy reading a series in particular, and one lucky commenter will win a copy (book or eBook) of Wicked Wagers, The Complete Trilogy.

Story One – To Dare the Duke of Dangerfield

Lady Caitlin Southall’s temper has finally got the better of her. She’s challenged Harlow Telford, the Duke of Dangerfield, the most notorious rake in all of England, to a wager. She wants her house back. The one her destitute father lost to Dangerfield in a card game. But if she doesn’t win their bet, she not only loses her home, she loses her dignity and pride and damn it all, maybe her heart… For the handsome Duke has decreed, when he wins, she must spend the night in his bed.

Harlow Telford is amused by his hellion neighbor, Caitlin, or Cate to her friends, who seem to encompass everyone on earth except him. When she bursts into one of his private gatherings, he mistakes her for the entertainment. Her slap across his face sets him straight and raises the absurd desire to seduce the unconventional beauty into his bed. When she issues her daft challenge to win back her father’s pile of rubble, the terms are set.  And he’ll do anything to win—except fall in love… 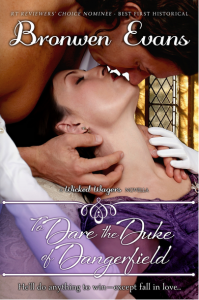 Story Two – To Wager the Marquis of Wolverstone

They Say Revenge is Sweet…

Marcus Danvers, the Marquis of Wolverstone, is renowned for his cynical demeanor. It’s rumored that long ago, a beautiful woman broke his heart. Now he lives life for pleasure. He’s the consummate, handsome rake. If anyone tries to get too close—let’s just say his bark is as bad as his bite.  That is, until the beautiful, as she is deceitful, Contessa Orsini re-enters his life with a wager he cannot resist.  When he wins, he’ll have Sabine exactly where he wants her—in his bed and at his mercy.

Forced to return to England and avenge her father’s death, Sabine knows the one person who can help her is the only man she has ever loved—Marcus.  The man who hates her with as much passion as he once loved her.  But Marcus doesn’t know that by winning the wager he’ll also be getting his revenge.  For there are some secrets best left buried…

Story Three – To Challenge the Earl of Cravenswood

To live happily ever after…

Henry St. Giles, the Earl of Cravenswood, longs to find his soul mate. Now that his two best friends, both reformed rakes, are happily married, the need becomes an obsession. When they challenge him to find a wife by the end of the season or marry his neighbor, the innocently alluring Lady Amy Shipton, he can’t believe his luck. He wins, either way. But a darkened garden, a case of mistaken identity, a drunken kiss, and a dropped emerald earring, leads Henry on a Cinderella hunt. He knows the woman he held in his arms could be the one he’s searched for all his life. He just has to find her.

Lady Amy Shipton is determined to marry for love instead of sharing her husband like her mother did. So why did she let her handsome neighbor and romantic fantasy, the Sinful Saint as he’s called for his bedroom prowess, seduce her in his garden? And what can she do when in the middle of their passionate encounter; he whispers another woman’s name. Now Henry is hunting the owner of the earring Amy left behind, and she’s determined to retrieve it before her identity is revealed. She’s not about to give her father the ammunition he desperately wants to force her down the aisle.

Vanessa, here.  Doesn’t this trilogy sound awesome?  To win a copy, just tell us why you enjoy reading series and what are some of your favorites.  One person who comments will win a copy of Bronwen’s trilogy.  And don’t forget to stop by her website to read the excerpts from all three novellas!