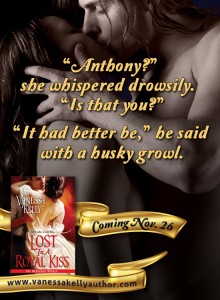 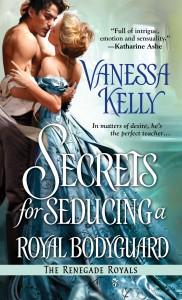 Multi-published, multi-talented author Phoebe Conn is back on the blog with us today, guest blogging about her latest books.  Phoebe has written so many wonderful novels over the course of her distinguished career, and I would urge my readers to check out her extensive backlist on her website.  Right now, I’m going to turn the blog over to Phoebe, who’s going to tell us how she researches the settings for her wonderful books.

People often ask me if I travel to do research. When there’s an opportunity, I quickly pack my bags. When my husband served as an Army officer, we lived in Germany and used every day of his leave each year to tour Europe. We took photos and I made notes in a journal. The Internet is terrific for research when I can’t visit the site of a book for colorful detail. I also use travel guides with plenty of photos and essential facts to base my stories in reality. 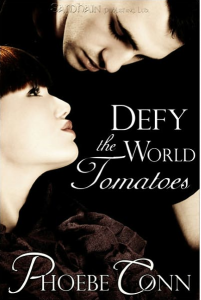 For DEFY THE WORLD TOMATOES, a Samhain contemporary, I chose a town up the coast from Santa Barbara for the setting and named it Monarch Bay. I crisscrossed the downtown, which was filled with shops catering to tourists. I bought frozen yogurt and watched the people passing by. There is a beautiful outdoor nursery and gift shop there, and it was the inspiration for the Defy the World Tomatoes nursery my heroine and her best friend open. I used a historic mission style inn in Riverside for the inn Griffin and Darcy visit. I had a fictional town, so anything needed for the story could easily be shifted to a new location.

There is a stately Langham Hotel in Pasadena, I chose the setting for a reunion party  in TANGLED HEARTS. I visited on a rainy afternoon in my trench coat carrying a clipboard. I walked around the hotel making notes on the décor and bought postcards in the gift shop. (I once heard no one questions someone with a clipboard because they appear to be working.) Favorite restaurants appear in my books. There’s no reason to invent a café when there are so many delightful ones, and it’s a perfect excuse to dine out! Takeout menus provide tasty ideas for meals and are a wonderful resource. 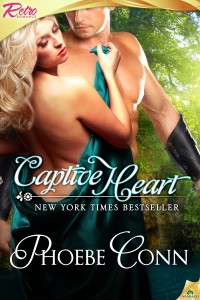 Setting a scene in an actual location adds to the readers’ experience. When a scene is rich in detail, the story comes alive. I toured Scandinavia to collect background for my February Samhain Retro release, CAPTIVE HEART, a passionate Viking adventure. I’ll give a free copy, print or ebook, to one of the people who comment. It’s one of my most popular books and a New York Times bestseller. I love to hear from readers. Please send me an email at:

Well, you heard the lady! Let’s start leaving those comments.  Just tell me what country or place you dream of visiting more than any other to have a chance to win Captive Heart. 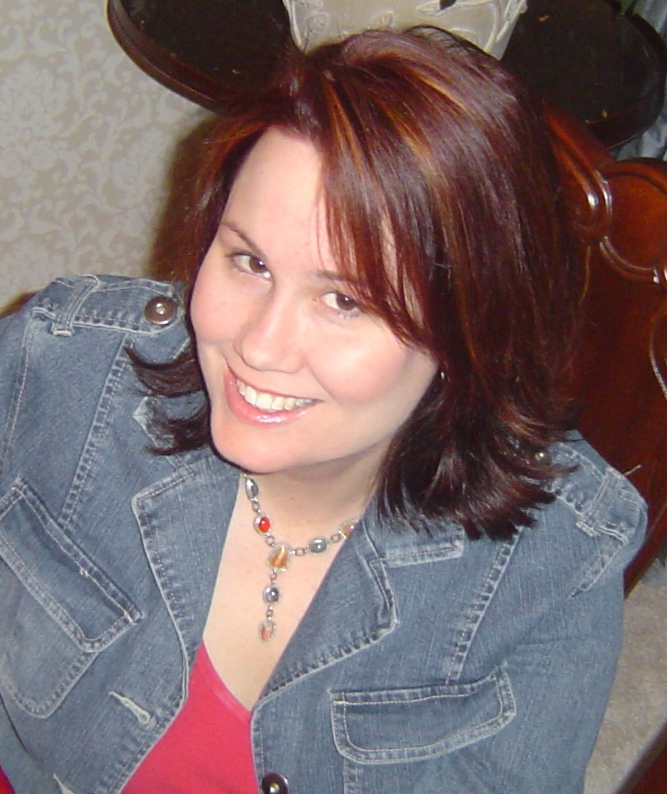 I’m thrilled to welcome New York Times best-selling author Angie Fox to the blog!  Angie’s paranormals are sexy, adventurous, and a whole lot of fun.  I’m going to turn things over to her now, and she’s going to tell us all about riding with the dogs.

Riding with the Harley Dogs: One Author’s Adventure

I’d always known writing would be an adventure, but I never predicted my writing would put me on the back of a coal black Harley Davidson, with an Irish Setter in tow. I’d set out to write a paranormal about a straight-laced preschool teacher turned demon slayer who has to run off with a gang of geriatric biker witches. But my heroine has a smart-mouthed dog that, thanks to her new powers, can talk…and talk…and talk. And I really loved that dog. What’s a writer to do? Well, I went online and learned that there is a nationwide club of Harley bikers who ride with their dogs. So my heroine could have her pink Harley, and her Jack Russell Terrier too.

And of course I had to meet these Harley riding dog lovers. I called up a few of the members of a Biker Dogs Motorcycle Club and the adventure began. They invited me into their homes, introduced me to their dogs and, like my heroine, the bikers hoisted me up on the back of a Harley, with a dog in tow. 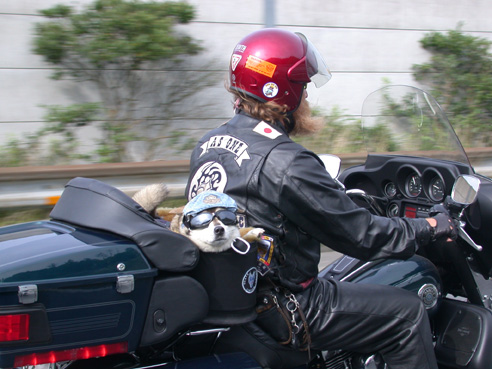 Things I learned right off the bat:

1. After an hour on a Harley, you’ll walk like John Wayne for a week

2. Helmets hurt when they are worn backwards 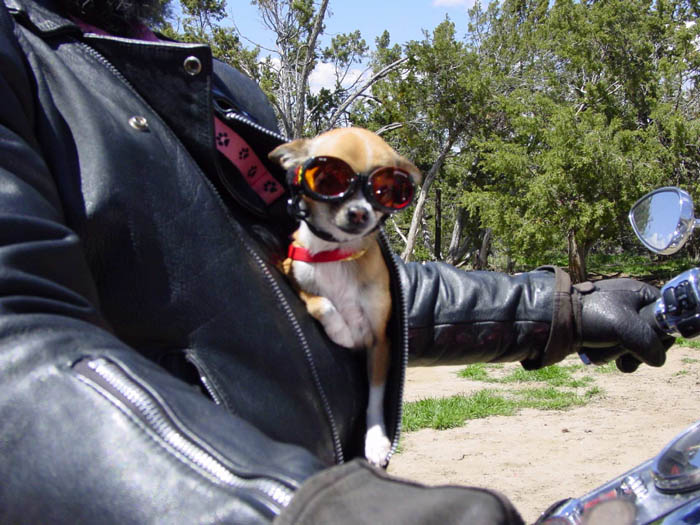 Stone, the biker who spent the most time making sure I didn’t fall off his hog, showed me how to ride, invited me to some biker rallies (note to self: don’t wear pink next time), and helped make the Accidental Demon Slayer series as real as it can be (for books about a somewhat sheltered preschool teacher turned demon slayer).

So just when I thought I was writing fiction, it seemed my made-up characters from the Accidental Demon Slayer books weren’t so imaginary after all. One of the bikers I met even has a wife who is a biker witch. I’m wondering if she, like my heroine’s biker witch grandma, wears a “Kiss my Asphalt” T-shirt and carries a carpet bag full of Smuckers jars filled with magic. Maybe I’ll find out on my next adventure.

Want to win a copy of The Accidental Demon Slayer?Just take the What’s Your Biker Witch Name? quiz. Post your biker witch name in the comments and you’re entered to win. Good luck!

Vanessa, here.  Just for the record, my Biker Witch Name is Hog Wild Harriett Wheelie-Gig!  So hop on over to Angie’s quiz and find out what your kick-ass name really is!

Angie Fox is the New York Times bestselling author of several books about vampires, werewolves and things that go bump in the night. She claims that researching her stories can be just as much fun as writing them. In the name of fact-finding, Angie has ridden with Harley biker gangs, explored the tunnels underneath Hoover Dam and found an interesting recipe for Mamma Coalpot’s Southern Skunk Surprise (she’s still trying to get her courage up to try it).

Angie earned a Journalism degree from the University of Missouri. She worked in television news and then in advertising before beginning her career as an author. Visit Angie at www.angiefox.com.

I’m guest blogging today with my super-talented friend, Cynthia Eden, who writes very sexy paranormal romance and romantic suspense.  We’re talking about the importance of secondary characters, which partly involves a discussion of this guy: 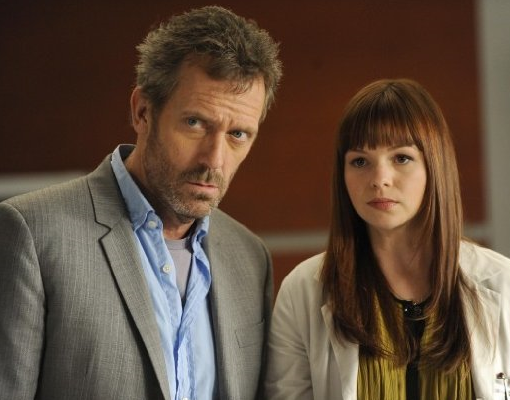 I’ll also be talking about some of the secondary characters in My Favorite Countess, and the role they play in the book.  Please stop by to join the discussion, and also have a chance to win a copy of the book!  You can join in on the fun on Cynthia’s blog.