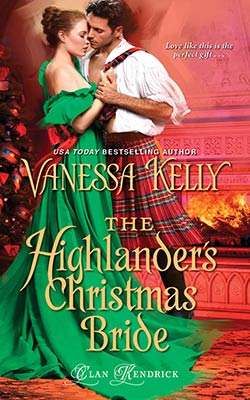 The edict was delivered in a tone of mild regret, completely at odds with the appalling effect it would have on her life.

“But…but you cannot just kick me out,” Donella Haddon stammered. “What the devil would I do with myself?”

A spasm crossed Reverend Mother’s dignified features. “Remember where you are, my child.”

Donella would have been able to describe the prioress’ study in the Convent of the Sacred Heart even if blindfolded. After all, she’d received a fair share of gentle but guilt inducing scolds in this very room.

“That is precisely my point,” Sister Bernard intoned. “Donella never remembers where she is.”

As Novice Mistress, Sister Bernard was Donella’s immediate superior and the bane of her existence. She stood behind Reverend Mother’s chair, her spare features obscured by her cowl and the sun shining through the window at her back. Donella could easily imagine Sister’s disapproving frown, because she’d seen that on a regular basis, too.

“My final vows are only a few months away.” Donella waved her arms, her wide sleeves flapping like a bird’s wings. “It would be an utter disaster to turn me away now. I’ve given up everything to be here.”

When Mother’s iron-gray eyebrows arched up, Donella winced. The prioress was a truly saintly woman, but no one could argue with those eyebrows. They conveyed volumes, and the message was that Donella’s goose was indeed cooked.

“My dear, such dramatics are unnecessary. I’ve discussed your progress with Sister Bernard and Sister Agnes—”

Sister Agnes was the Mistress of Liturgical Music and even more exacting than Sister Bernard. If those two had lined up against her, Donella’s goose was scorched beyond recognition.

“And we’re all in agreement,” Mother firmly continued. “We believe that life in an enclosed order may not be the correct path for you. Some time in the outside world would be helpful in ascertaining your true vocation.”

“Or if you even have one,” Sister Bernard said. “In my opinion, that remains to be seen.”

Donella clamped her lips tight against the impulse to stick her tongue out at the old…the good woman. Sister Bernard had never trusted Donella’s vocation.

In truth, it was hard to argue with their assessment. For months, she’d had the growing sense that she’d once again made a fatal mistake. Ghastly little twinges of guilt and anxiety had kept her awake at night and distracted her during the day.

Something was very wrong. She knew it, and so did Mother and the rest of the sisters.

Her scalp prickled with perspiration under the close-fitting cowl. What in God’s name would she do if they shoved her out into the world? Over three years ago, she’d run from that world as fast as she could, carrying no doubt that she’d made the right decision.

“Sister Bernard, you’ve always worried about me because I was not raised within the Catholic Church,” Donella said, trying to sound calm. “But I can assure you that my conversion was entirely sincere.”

Really, the woman was such a snob. The aristocratic granddaughter of a French émigré family in the Bourbon line, it was no wonder she sniffed down her long nose at Donella.

Still, Donella’s great-uncle was the Earl of Riddick, a descendant of Scottish kings. She’d stack her relatives up against snooty Sister Bernard’s any day.

She supposed that made her a bigger snob than Sister.

Donella shook her head. “But I’m very good at following the rules. Everyone knows that.”

So good, in fact, that everyone also believed her to be a total bore. Certainly Alec Gilbride, her cousin and former fiancé, had thought so. He’d found her so boring he’d run away from home at the age of sixteen and refused to come back for ten years.

Sister Bernard snorted. “You fall asleep in Chapel on a regular basis, you have trouble memorizing the liturgy, you deliberately sing off key—”

“I do not.” She sometimes just lost her place because her mind wandered.

“You frequently break the Great Silence,” Sister Bernard ruthlessly continued, “and you have a fatal tendency to interrupt your elders. That is most surprising, since we were assured by your family that you were an obedient, biddable girl.”

“That’s exactly what I am,” Donella countered. “Obedient and biddable.”

“If you were, you lost the knack of it.” Sister’s tone was as dry as a communion wafer.

That was probably true. But if they kicked her out now, it would prove to her family that they’d been right about what her great-uncle had called her mad scheme to run away from life.

Reverend Mother finally intervened. “My child, why do you wish to become a nun?”

“Because it’s so peaceful and quiet,” she finally blurted out. “And because I love God.”

“And I do like the music,” she lamely added.

Never before had Mother or any of the other sisters asked that simple but fateful question. Becoming a Catholic nun in Scotland was not for the faint of heart, so it had probably never occurred to them to question her vocation. Besides, her uncle had given the convent an exceedingly generous dowry as payment for Donella’s entrance. No abbess in her right mind would have looked askance at the support of a powerful Scottish earl, even a non-Papist one.

“One does not enter a convent seeking to hide from problems,” Mother said. “It has been our experience that unresolved issues can loom even larger inside these walls, as I think you’re finding out.”

Donella pressed her hands onto Mother’s scarred oak desk and leaned forward to meet the older woman’s wise gaze. “I’ll try harder. I swear I will. Just give me another chance, please.”

Mother shook her head. “No, dear child. You have done as well as you can, but this is not the life for everyone.”

“Perhaps she could try the Franciscans,” Sister Bernard suggested. “They’re not as exacting as we are.”

In other words, that order might be inclined to overlook her many failings, especially if she brought along her substantial dowry.

Donella sank into the creaky chair in front of Mother’s desk. Since she was clearly going to get the boot, there was little point in standing on her best behavior.

“And of course we’ll be returning your dowry,” Mother said.

Since that would leave the order in something of a bind Donella would see to it that either Uncle Riddick or Alec made a generous donation to the convent to offset the financial blow.

At the thought of her cousin—the man who’d rejected her to marry another woman—Donella felt sick. More than anyone, Alec had supported her wish to enter the convent. He’d done it because he truly cared about her. He’d brought everyone else in the family around, too, and now she’d failed them all yet again. Her family loved her, but they hadn’t a clue what to do with her.

And, now, neither did she.

“I suppose I could try the Franciscans,” she said. “Are there branches of the order in Scotland?”

And wouldn’t that go down like a treat with her great-uncle? Scotland was one thing, but Ireland?

“Whether the Franciscans would accept you is beside the point,” Mother said. “As I said, you need to ascertain if you have a true vocation, Donella. The best way to do so is by returning to the outside world.”

Panic flared inside her body. Donella didn’t know if she’d ever be ready for the outside world, where she’d again face all the troubles she’d so gratefully left behind.

The prioress rose to her feet. “My child, what is the fundamental principle of life within a religious order?”

Donella came to her feet as well. “Obedience, Mother. First to God, and then to you.”

“Correct, and I am requiring this final act of obedience from you. Accept my decision with good grace, and take this time to search your heart for what you truly desire. If you do this in good faith, you will find the answers you need.”

Mother. The word echoed through her memory. Her real mother had also demanded obedience, until she’d made it utterly impossible for Donella to comply. They’d almost lost everything then, and only by the grace of God—and her great-uncle—had disaster been averted.

“I’ll have to go into the village and arrange for a carriage,” Donella said. “I could do that tomorrow, if you like.”

Now that the departure had been forced on her, she had no wish to linger. Knowing how thoroughly she’d failed made her hot with shame.

“That won’t be necessary,” the prioress said. “I wrote to Lord Riddick this morning and informed him of my decision. I’m sure he will want to make his own arrangements for your return to Blairgal Castle.”

Donella had to struggle to hold back a most irreverent curse. She’d hoped to at least be able to explain this wretched state of affairs to her family in person. Now, even that small measure of control and dignity had been taken away from her.

“We likely won’t hear back from my uncle for several days if he has to make all the arrangements. He’s very busy, you know.”

“I’m sure he can spare a carriage and escort,” Mother said dryly. “We’ll wait to hear back from him. For as long as it takes.”

Hanging about would simply prolong the agony. “I’m sure I could easily hire a post-chaise down at the inn. I could pack in a trice and be on my way.”

Sister Bernard looked scandalized. “Your uncle would not wish you to travel alone, Donella. It would appear exceedingly slipshod and indecorous.”

“It’s only a two day journey. I’m sure I’d be perfectly fine.” At this point, she scarcely cared if she ended up murdered by bandits.

“You will stay in the convent’s guesthouse until we hear from your uncle,” Mother said firmly. “You can spend that time getting used to the world again and thinking about your future.”

What future? As far as Donella could tell, she had none.

“Of course, Mother,” she replied, trying to sound like she meant it.

The prioress rewarded her acquiescence with a smile. “You might even enjoy it after your years of enclosure. You can walk about the village, do a little shopping, and have a good chat with Father Thomas at the church. I have every confidence he can help you make peace with this decision.”

“If only it had been my decision to make, Mother.”

The elderly nun let out a gentle sigh. “My dear child, I know this is a blow to your spirit—and to your pride. But you do have a choice as to how you will respond to this challenge. You can either see it as a failure or as an opportunity. I hope you will choose the latter.”

Since there was no response to that eminently practical if irritating advice, Donella simply crossed herself when Mother blessed her.

Sister Bernard went to open the door to the main hallway. “Go to your cell and begin packing. I’ll join you shortly.”

Donella walked out with as much dignity as she could muster, resisting the urge to slam the door. She never slammed doors or stormed off. In fact, she rarely made a fuss about anything.

The reward for all that good behavior had usually been a big, fat, kick in the backside. And now it had happened again.

Maybe it was time to start kicking up a fuss.