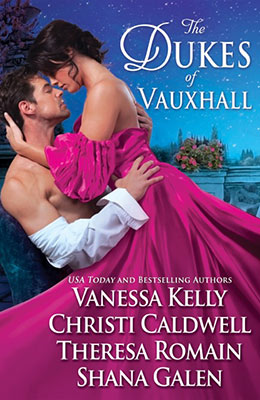 The Buccaneer Duke, by Vanessa Kelly (A Renegade Royals novella)

Captain Roman Cantrell, illegitimate son of a royal duke, served his country as a ruthless privateer on the high seas. But the war is over and his father orders him home to London to find a respectable wife, one who will help restore his reputation amongst the ton.

But the only woman Roman finds remotely attractive is the opposite of respectable. Antonia Barnett is decidedly unconventional, positively scandalous—and entirely enchanting. Unfortunately, she’s also the daughter of his greatest rival, a man who believes that Roman’s dangerous past will come back to haunt him.

Troublesome fathers and ruthless enemies, however, are no match for Antonia—as Roman is about to find out…

Taken by the Duke, by Shana Galen

Fighting for His Lady, by Christi Caldwell

The Prodigal Duke, by Theresa Romain

READ FULL BLURBS AND EXCERPTS FROM THE OTHER NOVELLAS AT OUR SPECIAL, REGENCY ANTHOLOGY WEBSITE!

“The prince regent’s splashy birthday celebrations at London’s notorious Vauxhall Gardens provide the backdrop for The Dukes of Vauxhall, a charming quartet of linked historical romances by Shana Galen, Christi Caldwell, Theresa Romain, and Vanessa Kelly. All set during the same handful of weeks and the same dizzying crush of events—a prize fight, a masked ball, etc.—each story gives the reader a different voice, a different perspective, and a different couple to love! And, oh, a different kind of duke!” ~Heroes & Heartbreakers

“I was thoroughly enraptured by how cleverly the authors entwined common threads into each of their stories…all the authors have previously written outstanding romance books about the Regency period, and these fun novellas are totally gratifying. THE DUKES OF VAUXHALL has enchanting characters, original circumstances, and compelling emotional issues in every captivating story.” ~alwaysreviewing.com

“Antonia’s forthrightness is purely delightful, as is their attraction to each other. Their conversations are guaranteed to bring a smile and you can’t help but root for them as they try to convince Antonia’s watchdog father and the duke that they belong together.” ~4 roses, Roses Are Blue

“Scandals and reputations are forgotten when love comes into play. I loved this one and how it included events from the other stories…the ending was perfect for this story.” ~5 hearts, Sassy Book Lover

“Four extremely gifted historical romance authors have combined their efforts in this fabulous anthology, definitely one of the best ever…Vanessa Kelly has once again written a splendid story!” ~5 butterflies, Buried Under Romance

“There is so much heat and emotion between Antonia and Roman that runs hotter with each additional encounter. Their family problems are realistic, and I loved how Kelly resolved this issue for them (because families can be a royal pain in the butt). But Antonia and Roman are the star of this story.” ~Romance Novel News