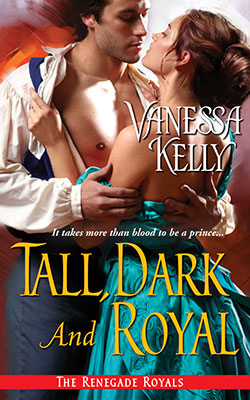 Dominic Hunter wheeled his curricle between the iron-mounted gates that bracketed the forecourt of the handsome Jacobean manor house. Peter, his groom, leapt down before the carriage came to a full stop at the portico.

“Stable the horses,” Dominic ordered. “I don’t know how long I’ll be staying.”

“Aye, Sir Dominic. I’ll give ’em a rubdown myself.”

Dominic had crammed the horses more than he normally would on the busy road from London to Camberwell because the message he’d received this morning had made him break out in a cold sweat.

Chloe is in need of your assistance. She claims to be fine, but I think it best you come immediately.

How typical of Griffin to refer to his mother by her given name, as typical as his lamentably terse note. But Griffin would never summon Dominic unless the situation called for it, which meant things were far from fine.

The fact that it was Griffin rather than Chloe asking for his help was an added irritant. After her dramatic and emotional reappearance a month ago, Chloe had subsequently adopted a calm, carefully polite manner to keep Dominic at bay. She’d spent the long years of their separation building walls around her heart, walls she seemed reluctant to dismantle. Dominic understood better than anyone the wounds Chloe had suffered. Any reasonable man would give her the time she needed to adjust to the momentous change in her circumstances. After all, for years, Dominic and Griffin had feared she was dead. To have her suddenly back in their lives was a shock for all of them.

Still, when it came to Chloe, Dominic was anything but reasonable. He wanted to blast through the barriers to reach the sweet, innocent girl he’d loved, the girl he’d spent fourteen long years searching for. That Chloe was still sweet was undeniable, and her innocent and loving heart burned bright and true as the North Star. But layered over those gentle qualities was a wary approach to life that spoke of abuse and pain and exposure to an uncaring world. Every time Dominic saw Chloe’s gaze turn inward, her fawn-colored eyes growing dark with quiet desolation, he wanted to tear something—or someone—apart.

He was one of the most powerful men in England, but in the face of Chloe’s pain he felt utterly helpless.

Hill, Chloe’s butler, opened the door at Dominic’s knock and ushered him into the old-fashioned entrance hall.

Although Chloe’s true name was Steele, she’d been living in Camberwell for years as Mrs. Piper, a wealthy but reclusive widow from Northumberland. She’d maintained that fictitious persona with rigorous discipline. It had prevented even Dominic, with the resources of the Intelligence Service at his disposal, from finding her. It baffled him why Chloe had chosen to hide when she must have known he’d do anything for her, make any sacrifice necessary to protect her. All she would say was that she’d been convinced everyone thought her dead, and she’d believed her sudden reappearance in their lives would be too disruptive.

It was the most absurd thing he’d ever heard. And he was beginning to suspect she’d convinced herself that she was more a burden than a blessing in their lives, and that her past would bring her son and her friends nothing but shame and disgrace.

“How is she?” Dominic asked.

The butler grimaced. “Mrs. Piper is being obstinate, I’m sorry to say. Told me I was an old hen to carry on so.”

Dominic wasn’t surprised by Hill’s blunt speech. The man was more than Chloe’s butler—he was a trusted confidant and had for years been providing discreet assistance in her sometimes dangerous charitable work. Dominic suspected he provided another kind of support, too, standing in for the father she’d lost a long time ago.

“I suppose if she can gripe at you, then she’s not in too bad a shape,” Dominic said cautiously.

And that was the problem, wasn’t it? Dominic was afraid he didn’tknow Chloe anymore. He didn’t know what she wanted and, more importantly, what she needed from him.

He followed Hill along the low-ceiled hallway of the old house, taking in the quiet. On most days when Dominic came to call, at least three or four of the girls would be rambling noisily about or taking lessons with Chloe. There were also two young women who’d recently given birth, finding shelter under Chloe’s generous protection.

All told, there were currently seven girls at the manor, all either pregnant or with infants. Every single one had been abandoned by her family or forced away until after the pregnancy. Through word of mouth or the help of a mutual friend, they had found their way to the refuge of Chloe’s house in the countryside.

But today, tension held the unnaturally quiet house in its grip, as if something violent had fractured the security Chloe provided for her charges.

When Hill opened the door at the end of the hall, Dominic strode through but came to a sudden halt, his heart jolting at the sight of Chloe reclining on a chaise with a bandage wrapped around her head. Justine Steele, Dominic’s godchild, sat next to her holding a teacup. Lounging in a nearby armchair was Griffin Steele, Chloe’s son and Justine’s husband.

“What the hell is going on here?” Dominic snapped. He glared at Griffin, who had a knack for finding or, indeed, creating trouble. “How did your mother get hurt?”

Griffin let out a dramatic sigh as he came to his feet. “You have a lamentable tendency to blame me for everything, Dominic. I had nothing to do with Mother’s, er, little accident.”

Chloe threw aside her lap robe and stood. “Dominic, I’m fine. There’s nothing for you to worry about.”

But when she wobbled, Justine had to make a grab for her. In an instant, Dominic was by Chloe’s side. “For God’s sake, sit down.” He gently lowered her back to the chaise.

Her tall, slender body felt fragile in his hands, as if the merest touch could break her. But appearances were deceptive. For all her pale, delicate beauty, Chloe had a strong will and character that had withstood years of tribulation.

“You know the doctor told you to stay off your feet and rest,” Justine affectionately scolded.

“I’m not sure how she’s supposed to rest with you lot fussing over her,” Griffin said. “Hill has been popping in and out like a character from a farce, not to mention all the girls sneaking in. It’s a bloody circus.”

Justine frowned at her husband. “They’re worried about Chloe.”

Dominic throttled back his impulse to snap. “I would be most grateful if someone—anyone—would answer my question. Wait,” he said to Justine. “First, tell me what the physician said.”

“Perhaps you might try asking Chloe, Sir Dominic,” Chloe said with pointed courtesy. “As you can see, she is perfectly capable of speech.”

Dominic mentally winced. Chloe only used his title when annoyed with him. “I’m sorry, my dear. But it was a shock to come upon you looking like you’d been set upon by thieves.”

Thankfully, she flashed him a wry, forgiving smile. “Apology accepted.” She shifted her legs and patted the seat of the chaise. “Sit down and let Justine get you a cup of tea while I’ll tell you all about it. Not that I wanted to drag you into this ridiculous and unfortunate episode, but my son insisted. Who knew Griffin could fuss and worry as much as any old maid?”

Her son—one of the most ruthless and powerful men in London—rolled his eyes but declined to defend himself.

“What happened to your head?” Dominic eyed the bandage wrapped around her brow.

“I bumped it, that’s all,” Chloe replied. “The doctor insisted I wear this silly thing and my son won’t let me take it off.”

Griffin narrowed his dark gaze on his mother. “You didn’t bump your head. It was bumped for you when that bloody bastard shoved you into the wall. And you will keep that bandage on for as long as is required.”

Dominic had been reaching to accept a cup from Justine, but his hand froze in midair. Slowly, he turned to Chloe. “Someone shoved you?”

Dominic could hear Griffin grinding his teeth from several feet away. He sympathized, but the situation was confusing enough without him losing his temper, at least not until he’d apprised himself of the facts.

But once he tracked down the man who had dared to touch Chloe, the bastard would rue the day he was born.