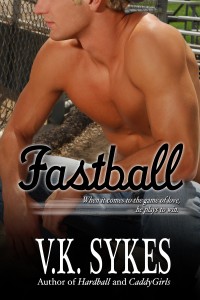 Here’s an excerpt from my brand new VK Sykes book, a sexy contemporary romance that I wrote with my hubby.  Fastball is actually a prequel to our award-winning romance, Hardball.  It stars Jake Miller, baseball superstar, and Maddie Leclair, intrepid sports reporter.  Maddie has just landed the job as the reporter assigned to the Philadelphia Patriots, Jake’s major league baseball team.  She’s about to join him for dinner and a private interview, although Maddie suspects that the sexy ballplayer had ulterior motives in agreeing to meet her…

After what seemed like an interminable and altogether tense cab ride, Maddie arrived at the restaurant shortly after eight. She spotted Jake immediately, already seated and looking astoundingly handsome in a navy sports jacket that framed his broad shoulders, a crisp white shirt, and a gold silk tie. The tie alone would likely have cost her at least a week’s salary and, for a moment, she couldn’t hold back a flash of anxiety. Jake Miller was so far out of her league it wasn’t even funny, and she had to fight the urge to back slowly out of the room before he even saw her. Impossible, of course, since the maitre’d was conducting her to the table with as much ceremony as a drum major led the band before a college bowl game.

Suck it up and act like a pro, girl.

She plastered a smile on her face as Jake stood to greet her, his sexy mouth parting in a slow grin, his gaze flicking appreciatively over her body. For a few seconds, she actually felt faint with pleasure and nerves, and she had to clamp down hard on the dizzy sensations rocking her body. Despite the effort, she could still feel the blush spreading over her cheeks, and the butterflies in her stomach went into full flap as Jake gallantly brushed the maitre’d aside and pulled out a chair to seat her.

As a sportswriter, Maddie was used to being around hot guys. She’d had her share of locker room encounters, and had seen enough naked chests and towel-wrapped asses to make such sights routine. But no player had affected her quite like Jake Miller, and she’d only seen him fully dressed. All he’d done so far was smile and pull out her chair for her, but she could already feel her hormones sparking in reaction.

And she couldn’t even remember the last time a guy had pulled out a chair for her, waiting until she was settled before taking his own seat. She had to get a grip on her all-too-eager libido or she might be offering to have his babies before they finished the first course.

“Thanks, Jake. Sorry if I’m a bit late. I hope you haven’t been waiting long.” She tried for casual, even though she felt anything but.

He shook his head, sending a lock of thick, wheat-colored hair sliding onto his forehead. He quickly raked a hand back to put it in place. “Maddie, would you mind if I say that you look absolutely spectacular tonight?”

She accepted the compliment with a smile and fussed with her purse for a moment before meeting his gaze. Casual wasn’t working, so maybe a little honesty was called for. “I’m not exactly sure how to do this, Jake. I’m obviously not used to conducting an interview under these circumstances. Maybe the best thing would be to eat, and then I’ll get out my recorder and we’ll talk business over coffee. Would that be okay?”

Jake shrugged, and Maddie found herself mesmerized by the slide of his brawny shoulders under the smooth, expensive fabric of his jacket.  She blinked and gave her head a mental shake. Man, she truly needed to get a grip.

“Even better,” she said, relieved to focus on work. Right now, it felt just a bit too personal for her comfort.

Jake motioned to the waiter. Since it was supposed to be a business meeting, she thought about ordering a coke or mineral water. But she opted instead for a glass of Sauvignon blanc, secretly acknowledging she could use a drink to settle her nerves. Jake ordered a bottle and Maddie retrieved her digital recorder, placing it on the table between them.

He leaned back, elbows resting on the arms of his chair, fingers laced in an easy grip. “Fire when ready,” he replied, looking totally relaxed. Maddie had never met a man who seemed more comfortable in his own skin, and it had the effect of easing her own nervous tension.

You can do this. Just stick to the prepared questions and you’ll be fine.

A deep breath and she launched into her questions. “Jake, I’m sure you must be expecting that I’ll want you to talk about the progress of your recovery from the ankle surgery,” she said rather formally for the benefit of the recorder. “About your expectations for this season and so on. I do want to talk about all that, but we can get to those things later, if that’s all right.”

He arched his brows slightly. Good.  She had surprised him.

“I say that,” she continued, “because that stuff isn’t really what I’m interested in for a feature piece.”

He unleashed one of those sexy smiles. “Whatever you like, Maddie. I’m in your capable hands.”

It finally dawned on her just how much that devastating smile contributed to his charm. His was an open and honest face with chiseled features, and his easy, masculine grin conveyed both mature intelligence and good humor. Maddie found it disarmingly inviting.

She blinked, losing her bearings for just a second before pulling it back together.

“Um, what I want to write about is what it’s been like to be Jake Miller, ballplayer and man. What was it like for you growing up? What were your hopes and dreams, and have you fulfilled them yet? What your life is like now, both on and off the field—who you’re close to, what inspires you, that sort of thing.”

His sharp gaze narrowed on her, as if assessing her intent. That irked her a bit, since she’d been straight with him from the beginning. If someone at this table had an ulterior motive for the evening, it sure as hell wasn’t her.

“You said you’d tell me what I wanted to know. Well, that’s what I want to write about,” she said, defiantly meeting his gaze. “I want my readers to know something about who Jake Miller really is. I don’t want to simply feed them the usual babble and athlete-speak that players and reporters always trot out. That’s incredibly boring and we all know it.”

When she stopped talking, a short silence fell over the table. Maddie reached over and clicked off the recorder before lifting her eyes back to his face. “Look, Jake, I’m even willing to let you see a draft of the article and talk about it before I submit the final version to the paper. I don’t want you to hold back because you think I’ll sandbag you somehow. That’s not my style, and I think you know it. When this piece is ready to go, my hope is that you’ll be as happy with it as I am.”

She held his gaze, praying she hadn’t made a huge blunder by coming here. She couldn’t afford to offend him, but she had a job to do and he needed to be clear on that. Whatever else might be going on she could address later, after she got her interview.

If she got her interview.

Jake took a drink, his eyes narrowed in concentration. She had to repress the temptation to fiddle with something—always a dead giveaway whenever her insecurities rose to the surface—but she vowed not to back down. She’d be willing to bet that no other reporter had ever stated the matter so bluntly, or under such unusual circumstances. He’d always made it clear to the world that he was a very private person, rebuffing any attempt to get him to talk about anything other than baseball. And although he had a well-deserved reputation for being a gentleman, she knew Jake had told more than one pushy reporter to mind his own damn business. His personal life had always been out of bounds to the press and the public.

As the silence between them lengthened, and Jake’s inscrutable expression revealed nothing, the butterflies in Maddie’s stomach took a synchronized nosedive. It looked like her exclusive, ground-breaking interview would be over before it started.

Fastball is available for only $2.99 on Amazon and Smashwords.  For more details about Fastball and other VK Sykes books, please visit our website.