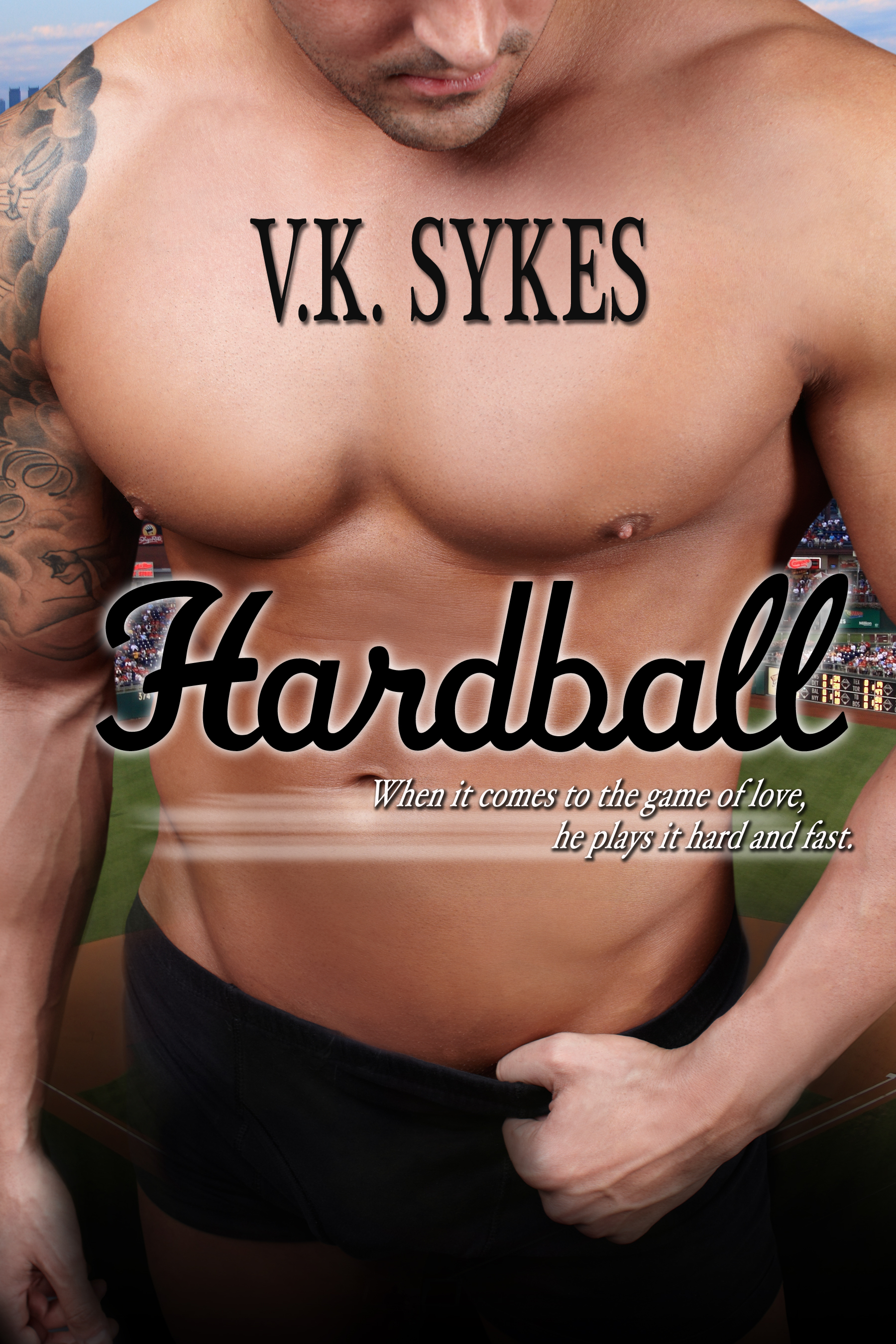 For #Sample Sunday, here’s another excerpt from Hardball, the sexy contemporary romance I wrote with my husband under the pen name of VK Sykes.  Our hero Nate, a superstar baseball player, is taking Holly, a serious and rather shy pediatric surgeon, to an upscale charity dinner for their first date.

Nate smothered a curse as they walked through the door of the country club.  As he’d suspected, they’d missed the cocktail hour, and the golfers and tournament guests had already started moving into the dining room to take their seats.  Fortunately, the cash bar remained open.  He definitely needed a stiff drink after the frustratingly clogged traffic on the expressway.

And after the frustration of keeping his raging libido under control.  He’d enjoyed the conversation with Holly, but right now he wanted nothing more than to pick her up in his arms, carry her out to the back seat of his car and wrap himself around her beautiful body.  Not that there was much of a back seat in the DB9, but he’d figure it out.

But it wasn’t time yet for that kind of action.  Not even close.

God, the woman looked so damn hot in that snug-fitting dress.  Just walking behind her on the way to the bar, his hand riding low on her slender back, gave him a hard-on.  Probably every other guy in the place, too.  Her long, elegant legs and the tantalizing swell of her breasts didn’t pass unnoticed by the men crowding around the bar.

Forget it, suckers.  She’s mine.

Holly turned slightly and unleashed her sweet smile on him, causing his heart to actually skip a beat.  She’d forsaken the wire-rimmed glasses and ponytail, her true natural beauty no longer obscured by professional armor.

He managed to pry his lips open to speak.  “What can I get you to drink?”

“Sure, but I’ll be ordering wine for the table, when we get inside.  Red and white both.  But I think I’m going to start with a shot of good old Knob Creek.”  He’d been pleased to see the bar trolley included his favorite bourbon.

Holly didn’t hesitate.  “Make it two, then.  Bourbon sounds about right after the kind of day I’ve had.”  She paused for a moment.  “Fortunately, the car distracted me a little,” she said in a wistful voice.

Nate sighed dramatically.  “Well, then, thank God I got that car.  It’s obviously way more interesting than its owner.”

Holly turned down the corners of her mouth into a “poor you” expression.  “I didn’t mean it that way.  Gosh, you are a sensitive flower, aren’t you, Nate Carter?”

He faked a wounded look.  “I have tender feelings, easily bruised.  Self-esteem issues, I guess.”

“I’m sure,” she said dryly.  “Just let me know if you need professional help.  I know a couple of good shrinks who could give you a hand.”

He laughed.  “I’ll keep that in mind.”  He picked up their drinks and stuffed a fiver in the tip jar.  “We should go in now.  I see my friends are already at the table.  Would you care to take my arm, ma’am?”

“Absolutely, sir,” she said with a brilliant smile as she slipped her arm through his.

As they made their way through the crowd to his reserved table, Nate saw that Jake and Maddie had already taken their places, as had Dr. Fredericks and his wife.  Martha and Dirk apparently hadn’t yet arrived.

Nate had slipped a tip to the banquet manager earlier that afternoon to have name cards placed behind each plate at his table.  That way he’d ensured the seating arrangement he wanted.   Clockwise, starting with himself, the seating was going to be Nate, Maddie, Jake, Martha, Dirk, Mrs. Fredericks, Dr. Fredericks, and Holly.  He’d have to share Holly with Fredericks, and would probably get the short end of the conversation, but there was nothing to be done for it.  After all, he’d lured her there with the promise of spending time with the famous doctor.  And the idea of doing something that so obviously pleased her pleased him.

As they approached, everyone at the table except Maddie stood.  Maddie immediately started apologizing.  “You’ll have to forgive me for not standing up.  I’m afraid it practically takes a block and tackle to hoist me perpendicular these days.”

Maddie was eight months’ pregnant, and it seemed to Nate that her diminutive body was becoming nearly as wide as it was tall.

He made introductions all around.  Beaming, Holly shook hands with James and Diana Fredericks, and then moved around to greet Jake and Maddie.  As she leaned down to shake Maddie’s hand, Nate heard her murmur, “You’re absolutely radiant, Maddie.  When are you due?”

“First week of July,” Maddie replied.  “This baby is so huge I’d swear there were twins in here if I didn’t know better.  But look at my husband and you can see why.”

Holly eyed Jake Miller as they shook hands.  Nate found himself clenching his jaw at her appreciative look as she sized up his mountain man of a friend. At six-four and close to two hundred fifty pounds, Jake was a hell of an impressive specimen.  Holly gazed seriously for a moment at the two of them standing side by side, as if she were comparing them at a celebrity auction.

Nate put his arm around Jake’s shoulders.  “Holly, this gorilla is my best friend in the whole world.  He’s actually a lot smarter than he looks, too.”

“Nah,” Jake retorted, “I’m obviously dumb as an ear of corn because I keep putting up with you, Carter.”

Maddie groaned.  “Ignore the boys, Holly.  They rag each other endlessly, like irritating little brothers.  It’s some kind of jock ritual that I’m afraid will never end.  You’ll just have to get used to it.”

Holly flinched a bit, but then laughed.  She patted Maddie on the shoulder before returning to her seat beside Dr. Fredericks.  Nate flagged down a waiter and ordered three bottles of a Sonoma Valley Cabernet and three of a French Sancerre.  As the table’s host, he wanted to make sure everyone had a good time.

Especially Dr. Holly Bell.  After all, he had plans for her later tonight.

As he took his seat, Holly was already in full-flight conversation with Fredericks.  Between Maddie’s easygoing warmth and Fredericks’ collegiality, she seemed at ease right away.  Nate took the opportunity to study the contour of her neck and shoulders in the sexy sleeveless dress.  She’d draped her glossy, long hair to the side and down over her shoulder, revealing the perfectly smooth skin of her elegant neck.  It was all he could do to stop himself from leaning forward and running his tongue and his lips over every square inch of that exposed skin.  He was enjoying thinking about what he would do to her later when Holly turned back, catching him unawares.

“I love these cute little snow globes,” she said.  She picked up one of the little souvenirs the tournament committee put in front of each place setting.  “Philadelphia landmarks.  What a great idea.”   She turned the globe over and then set it back down upright.  As the flakes fell over the miniature Independence Hall, Holly gave him a wide smile, obviously delighted.

She gave a laugh as smooth and sweet as hot honey.

Her smile was so inviting that he almost leaned in and kissed her right then and there.  But Maddie broke in, tapping his arm.  She started to say something about the Patriots, then stopped as she craned her very pregnant body to see around him.  Nate followed her gaze and saw Martha and Dirk sweep into the room.  Martha was a step in front, more or less dragging Dirk by the hand.  Poor Dirk  looked nervous and uncomfortable, dwarfed and intimidated by Martha’s flamboyant personality.  She sashayed around the table planting air kisses on everyone, including the Fredericks, who she’d met at the previous year’s banquet.  When she got to Nate and Holly, she took a quick step back, looked the two of them over with arched eyebrows and whistled.

“Hoo-whee,” she said, “will you just look at these two!  Isn’t that just a darn magazine cover in the making?  Have y’all seen a handsomer couple north of the Mason-Dixon Line?”

Nate sighed.  Martha did like to ramp up the Southern Belle routine for first impressions.

Everyone at the table stood except Maddie.  Nate glanced at Holly, who had started to blush under Martha’s avid examination.  Cursing silently, he moved quickly to intervene.

“Martha, Dirk, you know everyone here except Holly.”  Nate put a comforting hand on Holly’s shoulder, and first introduced her to Dirk.  “And this often annoying creature,” he said with a fake growl, “is my good friend, the one and only Martha Winston.”

“They broke the mold after they made Martha,” Jake quipped to Holly, obviously trying to make her feel comfortable.

“As a public service,” Nate added.

“Now you jock boys mind your manners,” Martha scolded, shaking her finger at them.  “The doctor might just start believing your juvenile hogwash.”

Martha hugged Holly, giving her air kisses on both cheeks.  When she whispered a few words in her ear, Holly looked startled for a moment before she broke into a smile.

Nate frowned.  Jesus, what trouble is she up to now?  As usual, Martha had immediately drawn all the attention to herself.  God knew she was a great friend, but her diva qualities sometimes drove him nuts.

When they sat back down, Nate murmured in Holly’s ear.  “What lie did she just tell you about me?”

Holly’s eyes danced with amusement. “Mr. Big Ego.  Why do you think it was about you?”

He snorted.  “Let’s just say Martha and I have a history, and we know each other very well.  Too well.  She lives to pull my chain.”

“Is that a fact?  Well, she seems very nice to me,” Holly said in a teasing voice.

Two could play at that game.  “Of course,” he said solemnly, laying a hand over his heart, “I’d never do anything like that to her.”

“I’ll just bet.  All right, if you must know, she told me that I look way too sweet for—how did she put it?  Oh, an old hound dog like Nate Carter.”

A mischievous little smile lifted the corners of her mouth.  “And,” she continued, “I’m inclined to think she could be right.”

“She’s a vixen,” Nate said, trying not to laugh.

Holly poked him, pure joy lighting up her beautiful face.

Yep.  The night was getting off to a damn good start.