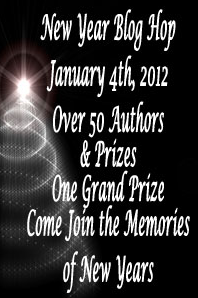 Today, over 60 authors are talking about their favorite New Year’s memories! What does that mean for you folks who are stopping by the blog today? Well, these authors are giving away gift cards, books, and other swag goodies throughout the day, and that includes me!  Each author will chose her own winner – so that means over 60 winners! And you can win on multiple pages, which is really cool.

And the best thing? The authors have put together TWO fabulous grand prizes.  One being a Kindle Fire to a lucky winner!

Our second grand prize is a $80 Amazon gift card!

So what am I giving away?  Two people who comment on the blog today will win one of my books:  one person will win My Favorite Countess, and another person will win a copy of my VK Sykes contemporary romance, Hardball.  Plus some fabulous chocolates to go along with the books!  All you have to do to be entered is tell me what your favorite New Year’s memory is.  Then, do the blog hop links at the bottom of this post and enter on as many other pages as you want.  The more blogs you leave comments on, the greater your chances of winning one of the grand prizes.

So, what’s my favorite New Year’s memory?  I think it had to be when I was still in grad school, studying English Lit.  I went to stay with some friends in New York City and we decided to throw an impromptu party on New Year’s Eve.  We called around, left some messages, got in some food and alcohol, and hoped for the best.  Really, though, we didn’t expect many people to show.  To keep ourselves from feeling like complete losers, we hit on a silly but amusing party game – trying to figure out which celebrity we thought each of us most resembled.  Once we assigned ourselves those roles, we decided to stay in character for the rest of the evening.

I should add here that most of my friends worked in theatre or film at the time, so role-playing came naturally.  Anyway, we also decided that for each guest who arrived – if they arrived – we would assign that guest a celebrity persona too.  After a few glasses of bubbly or a few beers, this seemed like a really great idea.  So when other people actually did start arriving we tagged them with the appropriate designation:  movie star, stage actor, musician, politician, even a few historical figures thrown in for good measure.

Much to our surprise, every new arrival seemed to think this silly game was a great idea.  Soon we had an apartment packed to the rafters with a bunch of party-goers acting out their new personas.  Maybe we’d all had a little too much to drink or maybe we were better actors than we gave ourselves credit for, but by the end of the night you would have sworn you were actually talking to Al Pacino, King George III, or Marilyn Monroe.  Okay, the libations were flowing very freely, but for one night it was great fun to pretend to be someone else.  Years later, I still remember that party with a great deal of fondness.

Oh, and what was my celebrity identity that night?  I was Sigourney Weaver.  No wonder I had such a great time at that party!

Now, tell me about your favorite New Year’s memory, and start the blog hop at the links just below.  Good luck!