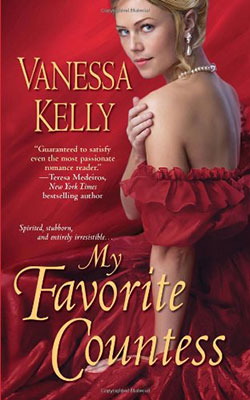 Bathsheba wedged herself into the corner of her luxurious carriage, resting her throbbing head against the squabs as the vehicle bumped over the appalling country roads. She let her eyelids droop, allowing herself to slip into velvety darkness. Sleep began to thread its foggy tendrils through her brain. Worries slowly dissipated as she drifted into welcome oblivion.

A loud thump, and then her head slammed into the side of the carriage as a wheel plunged into a hole the size of Westminster Abbey.

“Oh, I say, old girl,” said Matthew, peering at her with concern. “Hope you didn’t hurt yourself. The roads are ghastly, what with all the rain we’ve had lately.”

She stifled an unladylike curse and raised her hands to smooth her coiffure.

Another twenty-four hours of country living had done nothing to improve her humor. After an intensely boring dinner with Matthew—who had brought the new copy of Canterbury Tales to the table with him—Bathsheba had retired to bed early. She had tossed and turned most of the night, kept awake by the quarter hours of the casement clock outside her door and by her gloomy thoughts. Sleep had finally come near dawn. A few hours later she had been awakened by a cacophony of birdsong, which somehow seemed a great deal louder and much more annoying than all the tumult and bustle of the London streets.

Her day had passed with all the speed of a hobbled tortoise. After thoroughly depressing herself with an inspection of the overgrown gardens and shabby manor house, she wrote several letters, read a book, and went over the ledgers again with Mr. Oliver. By the time she and Matthew set out for the Dellworthys at the absurdly early hour of four p.m., Bathsheba was ready to shriek with boredom and frustration. When she was young she had loved the country. Now she had no idea how it had ever appealed to her.

“Where in God’s name is Dellworthy’s estate? Scotland?” she groused. “We’ve been driving for ages.”

Matthew smiled, ignoring her miserable temper. “Not much farther, my dear. And it’s not really an estate. More like a smallish park. But the house is only a few years old, and Dellworthy spared no expense in the building of it. The man made a killing in the wool trade. Rich as Croesus, they say.”

A few minutes later they bowled up a graveled drive through a small park, trimmed and landscaped to within an inch of its life. As the carriage pulled into the sweep in front of the house, Bathsheba jerked upright to stare out the window.

“I thought you said they built the house a few years ago.”

“It looks like a castle,” she said. An absurd, miniature castle. Loaded down with battlements, chimney stacks, and what appeared to be a small Gothic chapel sticking out into the front courtyard.

She looked at Matthew. “You must be joking.”

Sir Philip and his lady greeted them in an entrance hall crammed with Roman statuary, then escorted them into a red drawing room festooned with elaborately draped curtains—also red—held up by gilt carved eagles. Large pier glasses, bright crimson sofas in the French fashion, and an Egyptian chimneypiece added up to a stylistic assault. In the late afternoon sun, the entire room seemed to pulsate and throb as if it were alive. Bathsheba surreptitiously rubbed her temples, feeling the building ache of a migraine.

Lady Dellworthy introduced her to the other guests, including the vicar and his wife, some other respectable and boring local worthies, and Miss Amanda Elliott, a middle-aged spinster whom Bathsheba vaguely remembered from a previous visit. Miss Elliott, however, clearly remembered her, and not with fondness, if her coldly correct greeting was any indication.

Lady Dellworthy tapped Bathsheba’s arm with her fan. “And here is our local physician, the worthy Dr. Littleton. And his friend and former student, visiting from London. Perhaps you have met him already. Dr. Blackmore, may I present Lady Randolph, cousin to the current earl, Lord Randolph.”

Bathsheba turned away from the chill of Miss Elliot. She looked up, looked higher, and felt the breath clog in her throat as she found herself staring into the compelling gaze of a very tall and very broad-shouldered man. The throbbing, wound-colored drawing room faded away, as did the pain in her temples.

Like an untried schoolgirl she stood motionless, fascinated by the color of his eyes—a shivery, wintery gray. They were hooded and penetrating, with a weariness that called out to her, sneaking past her defenses, setting off a bittersweet ache in her chest.

He didn’t speak or move. She let her gaze drift over too-lean features that were beautiful in a starkly masculine way. There were deep lines around a sensual, generous mouth, and a hard jaw shadowed with the hint of a night beard that matched the black of his unfashionably short hair.

Bathsheba blinked hard and tried to look away, but she couldn’t. She had the bizarre notion she could stare into Dr. Blackmore’s face for days on end, and never once feel bored.

Amusement began to replace the weariness in those amazing eyes. The doctor bowed, then straightened to his considerable height. She felt like an awkward child standing before him.

“Lady Randolph,” he said, his deep, smooth voice sending a velvet hum up her spine. “It is a great pleasure to finally meet you. I have seen you at routs and concerts in London, of course, but have never had the honor of an introduction.” His smile grew knowing, as if he sensed her discomposure and found it entertaining.

She jerked herself to attention, irritated by her uncharacteristic loss of control.

“Why, Dr. Blackmore,” she replied in her best seductive purr. “How remiss of you not to secure an introduction. I’m sure I should be insulted. Perhaps if I bother to think about it long enough, I will be.”

He looked startled. Lady Dellworthy squeaked and fluttered helplessly beside him.

Bathsheba turned away to address Dr. Littleton. Fortunately, she did remember him, and took refuge in asking questions about the general health of the local villagers. The physician happily obliged her, launching into a detailed recital. But Dr. Blackmore still loomed over her, a disturbing presence that set her nerves jangling like a steepleful of demented bells. She ignored him, studiously listening to his colleague. After a few minutes—although it felt so much longer—he walked away.

She gradually let out her breath, doing her best to pretend she was listening to Dr. Littleton drone on about Mary something-or-other’s consumptive complaint. Why had she reacted so strongly to Dr. Blackmore? Certainly, he was a handsome man, but she had known dozens of handsome men, and taken a few of them into her bed. No. There was something else. Something that plucked a chord deep within her memory—something her conscious mind wanted to push away.

She dared a peek across the room, where Dr. Blackmore now stood talking with Miss Elliott and Matthew. As if she had tapped him on the shoulder, he glanced over, meeting her gaze with a direct, hard look.

Hard, but not cold. In fact, she felt burned by the heat in his eyes, and it frightened her. In a flash she suddenly remembered why. That was exactly how Reggie had looked at her when first they met. As if he already possessed her, body and soul. That look had sucked her in, consumed her, and had eventually made her life a long purgatory of despair. Standing at her husband’s graveside four years later, she had vowed she would never succumb to passion again.

Bathsheba stared into Dr. Blackmore’s intense gaze a moment longer, then turned away.