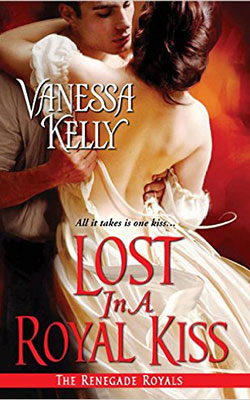 The door to Sir Anthony Tait’s study flew open and in marched the most tempting bundle of outraged femininity he’d ever set eyes on.  She marched across the floor, her tread so firm it left marks in the thick Axminster carpet.

Linnet had an interesting escort too, a unique departure from the type of chaperone who normally accompanied a gently bred, unmarried woman to a bachelor household.  The Linnet he knew rarely strayed from the boundaries of propriety, as careful in observing both the form and function of proper decorum as any member of the Court of St. James.  That she’d thrown it to the winds meant she was in trouble.  Whatever it was it must be bad, because she rarely asked for help, and especially not from him.

Anthony glanced at Linnet’s young companion, assuming he was the source of the problem.  The tall, lanky boy trailing in her wake looked furious, but also cowed into reluctant submission by the woman he topped by nearly a foot.  That was amusingly predictable, since Linnet managed to intimidate most of the men who blundered into her line of fire.  Deceptively petite, sweetly plump, and with the face of an angel, she’d fooled many an unwary man into thinking she had the personality of a celestial being, as well.

How wrong they were.

But where some saw a managing female, Anthony saw a woman determined to make the world a better place, especially for those she loved.  Her need to manage everyone who fell into her orbit had frightened off more than one suitor attracted to her pretty face and lush figure.  Observation had convinced Anthony that Linnet didn’t mind that in the least, preferring to remain a spinster.  In fact, he often thought she showed her claws for exactly that reason—to preserve her unmarried state, despite the gentle pleadings of her widowed mamma that she start looking about for a husband.

Anthony had every intention of turning those wishes into reality, regardless of the daughter’s objections.

Followed by the boy, Linnet came to a halt in front of his desk, glaring at Anthony as he rose to his feet.  Bringing up the rear was Anthony’s butler, obviously out of breath from rushing up the stairs after the unannounced intruders.

Anthony pressed his lips together to hold back a laugh.  There were few things he enjoyed more than watching Linnet with the bit between her teeth.  Despite her ability to rattle so many of their acquaintances, she never failed to remind him of a haughty little kitten intent on batting her litter mates into line.

She was as soft and pretty as a kitten too, and Anthony couldn’t wait to stroke her.  As well as making an excellent wife to manage his household and help further his career, she would be a most welcome addition to his bed.  Anthony had thought long and hard about the kind of woman he wanted to marry, and Linnet fit the bill on every count.

“Not to worry, Carter.  Better men than you and I have tried to restrain Miss St. Clare.  They have all failed.”

Linnet’s gaze, sparking with disapproval, drilled into him and, for just a moment, Anthony indulged in the pleasure of losing himself in her beautiful eyes, so darkly blue as to be almost violet.  Those eyes, combined with her pale skin and black hair, created a stunning and sweetly exotic picture.  One of Linnet’s grandfathers had been Black Irish, through and through.  His granddaughter had run true to her lineage, both in looks and temperament.

As they studied each other, her imperious demeanor shifted, transforming into a wariness born of years spent at Court.  When he gave her a warm smile she blinked with surprise, and he fancied the corner of her mouth reluctantly twitched upward.  Of course, that could be a trick of the light that filtered between the half-drawn draperies behind him, falling across her face as dusk softly brought an end to another June day.

He frowned at the clock on the Adam’s mantelpiece.  What the devil was she doing here at this time of day, unescorted on a trip to London by anyone but that scapegrace, Dominic Hunter?

“Did anyone else besides Dominic accompany you, Miss St. Clare?” Anthony asked in a politely incredulous voice.

A faint pink stained her cheeks, but then she firmed her chin.  “No, Sir Anthony.”

“That will be all, Carter,” Anthony said to the butler.  “I’ll ring if we need you.”

Carter’s gray eyebrows went up a tick but then he retreated, closing the door with exaggerated gentleness to express dissatisfaction with the unorthodox proceedings.  Since Anthony was the liaison between the Court and the Home Office, his servants were used to callers at any time of the day or night.  But unmarried young ladies?  Certainly not.  In fact, Carter was as much of a high stickler as Linnet.  Anthony suspected they would get on splendidly once she became his wife.

No longer bothering to hold back a smile—this episode was certainly livening up a boring afternoon of reviewing ledgers—Anthony moved around to lean against the front of his desk.  “Now that Carter has been dispatched, perhaps you will have a seat and tell me how I can be of service, Miss St. Clare.”

Standing behind her, Dominic cast Anthony a look brimming with resentment.  “We don’t need any help from the likes of you.”

Linnet turned sharply on her heel and quelled the boy with a stern frown, then pointed a gloved finger at a chair against the wall.  “Sit, and do not speak again, Dominic, unless one of us instructs you to do so.”

Anthony wasn’t surprised when Dominic instantly complied, though he did so with a surly lack of grace.  Unfortunately, Linnet had pointed him in the direction of a rather delicate Hepplewhite chair.  When Dominic flopped onto the seat, the graceful frame creaked out a protest.

Mentally wincing, Anthony returned his attention to Linnet.  “Shall we try again, Miss St. Clare?  To what do I owe the honor of this unexpected visit?”

She turned to face him, rigid and without her usual grace.  Her cheeks were flushed with anger, he thought, but there was more than a hint anxiety in her eyes.  Perhaps even a hint of fear.

His lingering traces of amusement faded.  Taking her small, gloved hand, he guided her to the comfortable leather club chair in front of his desk.

“How can I help you, Linnet?” he asked quietly.