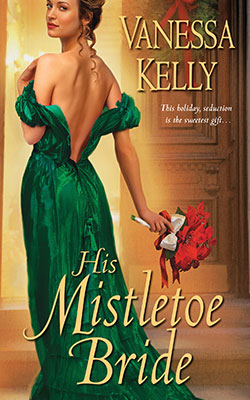 The maid led her downstairs and through a simply ornamented entrance hall to the door of the drawing room.  “There, miss.  They’re waiting for you.”

Phoebe nodded, suddenly so nervous her knees shook.  She silently ordered the starch back into her muscles and opened the door.   What she saw brought her up short.

Mrs. Tanner sat in a low chair by the fireplace.  A very tall, broad shouldered man stood opposite her, on the other side of the chimneypiece.  He was very handsome—quite the handsomest man Phoebe had ever seen.  And when his attention, narrowed and intense, jumped to her it struck her with an almost physical force.

Alarm skittered along her nerves.  Absurdly, she had the impulse to back out of the room as quickly as she could.

Silly.  Why be afraid of someone you have never met?

But as they stared at each other, she sensed some ill-defined peril, and she instinctively knew something dreadful was upon her.

Mrs. Tanner rose from her seat, momentarily splintering the tension.  “Phoebe, please come in.  This is a member of your grandfather’s family, Major Lucas Stanton, come to welcome thee to London.”

Phoebe slowly entered into the room, trying to shake the notion that she was approaching something awful and irrevocable.  The guarded expression on Mrs. Tanner’s face did nothing to dispel that impression.

Major Stanton took a step forward, looming—and looming seemed the only correct description—over her.  He was broad across the chest and shoulders, and every part of him looked hard and muscular.  Phoebe did not make a habit of dissecting the male figure, but he wore a well-tailored dark coat, pale, skin tight breeches, and tall leather boots, all of which showed off every line of his impressive physique.  Just looking at that brawny, masculine strength made her body hum with tension.

Cheeks flushing, she fixed her gaze on his face.  She found it disconcerting too, since his hard-cut, impassive features served as a stark contrast to eyes the color of a stormy sea.  The emotions she thought she perceived in their depths struck her as dangerous as the gales that had bedevilled her trip across the Atlantic.

Phoebe stared up at him a moment longer, transfixed by his slashing cheekbones and the granite line of his jaw.  All the men she knew were farmers and shopkeepers, simple men who dressed plainly and looked nothing like this man.  Next to them, he resembled…well, she did not know what.  But she knew she had never met anyone like him, though they had yet to exchange even a simple greeting.

His gaze, somber and wary, turned to one of puzzlement, jolting her into motion.  The poor man must think she was a wordless half-wit.

Though Quakers generally made it a point not to bow or curtsy before those of higher station, she dipped low, ignoring Mrs. Tanner’s tsk of disapproval.  Why risk offending the first relative coming to greet her?  “Major Stanton, thank you for coming to meet me.  It was kind you to do so,” she said, offering her hand in greeting.

His big hand closed around hers and he lifted it to his lips, brushing a lingering kiss across her sensitive skin.  The breath seized in her throat.  Quaker men did not go around kissing hands, much less making a show of it.

Fortunately, he returned her hand and her lungs recommenced function.

Her friend nudged her to a sturdy, brown-colored sofa next to the fireplace.  With a severe nod, Mrs. Tanner indicated to the major that he should take the seat facing them.  He did not bother to repress a low sigh as he carefully settled on a small caned chair that gave an alarming creak in response.  The sofa would have been a more appropriate choice for his large frame, but Mrs. Tanner clearly intended to punish him for his forward behavior.

“Major Stanton, how is my grandfather?” Phoebe asked impulsively.  “Did he ask you to fetch me?”

The swift glance he exchanged with Mrs. Tanner brought Phoebe’s anxiety rushing back.  Its chokehold tightened when the older woman reached over and took her hand in a comforting clasp.

“Phoebe, thee must prepare for unfortunate news.  But I ask thee to remember that the Father’s hand is in all things, and that he will watch over thee always.”

Fear swept through her.  “What are you talking about?”

When Mrs. Tanner hesitated, Phoebe shook off her restraining hand and jumped up.  The major rose immediately.

“Please, sir,” she implored.  “Take me to my grandfather.”

Compassion softened the grim lines of his face.  He struck her as a man not much given to that tender emotion, so whatever the cause it must be dire.

He stepped closer, reaching out to take her hand in a gentle grip.  “Miss Linville, you must sit.”   He had a firm, deep voice that held a compelling note of authority.  As it washed over her, she had to resist the impulse to automatically obey.  He smiled, as if to soothe her, and one finger stroked lightly over the back of her hand.  “I’m certain you should have a cup of tea before we have any further discussion.”

Unnerved by his touch, she pulled her hand away.  “I do not want a cup of tea.  I want you to tell me about my grandfather.”

He ran a thoughtful gaze over her face, as if taking her measure.  “Very well.  Miss Linville, it grieves me to inform you that your grandfather—my great uncle, Lord Merritt—died from an infection some weeks ago.  I didn’t write to you, since my letter would not have arrived prior to your departure.  I hope you will believe I would have spared you this trip, if it at all possible.”

A strange buzzing noise arose in her ears, then her knees buckled and she sank onto the sofa.  Her heart throbbed in her chest, straining against the shock.  For a terrible moment, she could not draw a breath.

Mrs. Tanner gasped her name and Major Stanton let out a low curse.  Swiftly, he came down on one knee before her and gripped her shoulders, holding her steady.  Until he touched her, Phoebe had not realized she needed someone to keep her upright.

“Hold her while I get some water,” exclaimed Mrs. Tanner as she rushed from the room.

“Steady on, Miss Linville,” Major Stanton murmured in her ear.  “Just lean against me.”

Coming up onto the sofa, he eased her into his embrace, resting her head against his broad chest.  As if controlled by some unseen force, her eyelids fluttered shut as, for the first time in her life, she found herself in the arms of a man other than her brother or father.  Her morals registered a faint objection, but her body wanted nothing other than to collapse against that solid wall, her cheek nestling comfortably against the soft wool fabric of his coat.  Tumult swirled in her brain, but his gentle embrace staved off the screeching panic that hovered at the edge of thought.

The door opened.  Footsteps hurried across the floorboards, as Mrs. Tanner rustled up to them with a glass of water in her hand.  “Major, thee must allow me to tend to Miss Linville.  Please let her sit up.”

Phoebe flinched at the note of censure in her friend’s voice.  Mrs. Tanner had every right to be offended because Phoebe had no business clinging to a man, no matter what the circumstances.  But she could not help shrinking further into his embrace.  Her stunned brain had latched onto the idea that as long as she remained in his arms she would be safe, that all the hurtful things in the world could not harm her.

Ridiculous, whispered the voice of reason.  She started to pull away, but Major Stanton gently adjusted his hold to keep her close.  Phoebe had to bite down on the whimper of relief that almost escaped her lips.

“I assure you, Mrs. Tanner,” he said, “I will release my cousin as soon as I know she won’t keel over in a dead faint.”

Phoebe frowned.  She never fainted.  And now that her wits were slowly returning, she felt the first flush of humiliation that she had allowed a perfect stranger to hold her so intimately.  Pushing herself upright, she began to withdraw from his arms.  For a second he resisted, keeping her fast in his embrace.  And, for a second, she did not want him to let go.