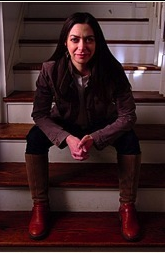 Hooray!  Zoe Archer is back on the blog today, talking about her new paranormal historical romance, Devil’s Kiss.  This is the first book in her new series, The Hellraisers:

Welcome to the ultimate bad boys.  A group of 18th Century rakes who will stop at nothing in their pursuit of pleasure—even if it costs them their souls.  Dark, sexy and beguiling, the Hellraisers will seduce you.  Sinning never tasted so sweet. 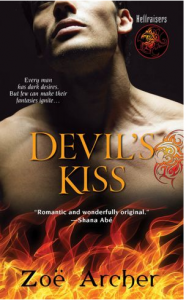 Sounds pretty awesome, doesn’t it?  Let’s talk with Zoe about her new book, and find out a little more about her, too.

Your latest series, The Hellraisers, is a based on a great high concept – a group of rakes who unleash the devil and literally raise hell.  How did you come up with the idea?

I’d been thinking about the Hellfire Club, actually.  The Hellfire Club was the name of a few exclusive clubs in 18th century England and Ireland, comprised of men of the aristocracy.  The most infamous Hellfire Club was founded by Sir Francis Dashwood around 1749 and lasting possibly through the 1760s.  It was alleged that this group of rakes used to meet in secret, dressed in monks’ robes, and have Black Masses that culminated in wild orgies.  Whether or not Dashwood and his fellow Hellfire Club members did these things isn’t entirely certain (though you can visit the extensive caves Dashwood expanded at West Wycombe), but he and his club are still fascinating scholars to this day.

My thoughts about the Hellfire Club led me to wonder: what if there was a group of 18th century rakes who literally were in league with the Devil?  Why would they summon the Devil, and what sort of powers might he bestow upon men who had wealth and privilege?  From there, the idea began to take shape, and the Hellraisers came into being.

Clearly, your heroes and heroines are all adventurous risk-takers.  Are you?  What’s the riskiest thing you’ve ever done?

The risks that I take aren’t of the jumping-out-of-an-airplane variety.  I wasn’t born with the daredevil gene, I think.  That’s where “writing as wish fulfillment” comes into play.  Deciding that my career would be as a novelist—I think that was risky.  There’s not much job security, and it isn’t a way to get rich.  Another big risk I took was when I had just started dating the man who would eventually become my husband (fellow romance author Nico Rosso), and was accepted to an MFA program thousands of miles away in Iowa.  I wanted to stay in that relationship, but the MFA program was very prestigious, and I knew that if I wanted to pursue a career as a writer, I’d need to go.  Also, I’d never lived outside of California before (except the first six months after my birth, when I was in New York).  But Nico encouraged me to take the chance.  He actually helped me drive a U-Haul all the way from California to Iowa (twice!).  It was a difficult two years, but at the end of it, Nico and I were still together, and I had a shiny MFA degree from the top writing program in the country.  So I think it was all worth it.

What do you read when you’re working on your books?  Do you read historical and/or paranormal romance, or does that mess with your own writing voice?

Depending on how deep into the writing process I am, I limit my reading.  It’s tough to keep other people’s stories and voices out of my own head.  For the most part, I read historical romance, with occasional side trips into paranormal and contemporary.  In case you’re wondering, some of my favorite authors are Meredith Duran, Julie Anne Long, Shana Abé, Joanna Bourne, Carrie Lofty, Tessa Dare, Loretta Chase, and Judith Ivory.

And now for the silly question!  You’re stranded on a deserted island somewhere in the South Pacific.  What two luxury items would you kill to have?

So, we’re not talking survival, right?  I don’t need to worry about water purification, hygiene, food preservation, shelter?  I’d need a computer so I could write.  And maybe my stand mixer so I could bake cupcakes and cookies.  What’s the point of being in a tropical paradise if you can’t have cookies?

Before we get to the book giveaway, here’s the blurb and all of Zoe’s details:

1762. James Sherbourne, Earl of Whitney, is a gambling man. Not for the money. But for the thrill, the danger—and the company: Whit has become one of the infamous Hellraisers, losing himself in the chase for adventure and pleasure with his four closest friends.

Which was how Whit found himself in a gypsy encampment, betting against a lovely Romani girl. Zora Grey’s smoky voice and sharp tongue entrance Whit nearly as much as her clever hands—watching them handle cards inspires thoughts of another kind…

Zora can’t explain her attraction to the careless blue-eyed Whit. She also can’t stop him and his Hellraisers from a fiendish curse: the power to grant their own hearts’ desires, to chase their pleasures from the merely debauched to the truly diabolical. And if Zora can’t save Whit, she still has to escape him…

Zoë Archer is an award-winning romance author who thinks there’s nothing sexier than a man in tall boots and a waistcoat. As a child, she never dreamed about being the rescued princess, but wanted to kick butt right beside the hero. She now applies her master’s degrees in Literature and Fiction to creating butt-kicking heroines and heroes in tall boots. She is the author of the acclaimed BLADES OF THE ROSE series. December marks the beginning of her new paranormal historical romance series, THE HELLRAISERS. Zoë and her husband, fellow romance author Nico Rosso, live in Los Angeles. Please visit her on the Web at http://www.zoearcherbooks.com

Zoe, thanks for being with us today!  Readers, Zoe will give away a copy of Devil’s Kiss to someone who comments on the blog today.  Just tell me what two luxury items you would bring to a deserted island, for a chance to win this awesome book!