For those of us who like romantic suspense – and there are a lot of us – the publishing world can be a frustrating place.  Many of the bigger traditional publishers have decided that romantic suspense is not the seller it once was, and have drastically cut back on the number of suspense books they publish.  A self-fulfilling prophecy if there ever was one, since making it harder for readers to find these books means they’ll eventually give up on romantic suspense and move on to other genres.

Fortunately, Harlequin is one publisher that still reliably produces romantic suspense, both through their category lines and their single title imprints.  My guest author today is one of the many talented authors in Harlequin’s stable of suspense writers.  She’s Karen Whiddon and she writes for Harlequin’s Silhouette Romantic Suspense line, and also for Nocturne, Harlequin’s paranormal line.

Luckily for us romantic suspense readers, Karen has a new book coming out in September.  I really love these category novels.  They have tight, suspenseful story lines and solidly satisfying romances that are great to gobble up in one go.  I also like the fact that the heroines in a lot of these books are ordinary women in danger, rather than secret agents or FBI profilers.  Not that I don’t like those types of heroines as well, but sometimes it’s fun to read about a character a little more like the rest of us! 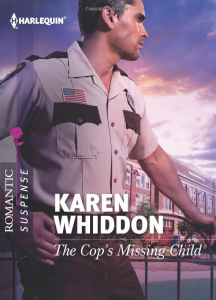 Small-town cop Mac Riordan lost his wife in a car crash, but his infant son survived, only to later be kidnapped. Now, five years later, Mac locates him living in Anniversary, Texas, with beautiful Emily Gilley. The more he gets to know this mysterious mother of his son, the less he’s convinced she’s a coldhearted kidnapper. She might be a victim just as much as he is. So when Emily’s under-the-radar lifestyle is suddenly discovered, Mac comes clean. The threats against her—against their child—escalate and Mac must risk it all to protect his son…and the woman who’s brought him back to life.

Sounds like a great, classic romantic suspense story, doesn’t it?  I’ll certainly be looking for Karen’s book when it hits the shelves in September.

And for my readers today, Karen is giving away a copy of one of her previous books, The CEO’s Secret Baby. 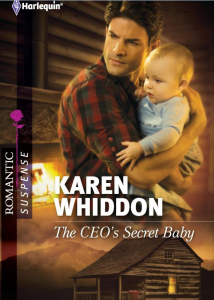 To win a copy of Karen’s book, just let me know what you think about the current state of the romantic suspense market.  Do you wish there were more suspense books available, and where do you tend to find the ones you do read?  One person who comments will win a copy of The CEO’s Secret Baby.

And be sure to stop by Karen’s website for a listing of all her books, including her backlist, now available in digital.