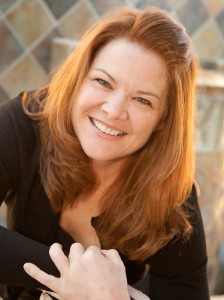 I have a special treat for my readers today.  I’m featuring debut author Joan Swan.  Joan writes sexy romantic suspense, and the first book in her Phoenix Rising series will be released by Kensington Brava on Feb. 28.  It’s called Fever, and one look at the cover will tell you exactly why. 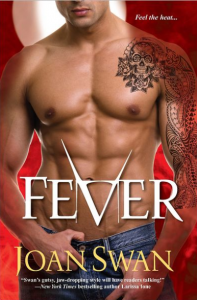 Whew!  I can already feel my temperature rising!  Here’s the blurb for Fever:

When Dr. Alyssa Foster is taken hostage by a prison inmate, she knows she’s in deep trouble. Not just because Teague Creek is desperate for freedom, but because the moment his fingers brush against her skin, Alyssa feels a razor-sharp pang of need…

A man with a life sentence has nothing to lose. At least Teague doesn’t, until his escape plan develops a fatal flaw: Alyssa. On the run from both the law and deadly undercover operatives, he can only give her lies, but every heated kiss tells him the fire between them could be just as devastating as the flames that changed him forever…

Sounds great, doesn’t it?  And now for the treat–an exclusive excerpt from Fever.  It’s the first kiss between Teague and Alyssa.

Before he stepped from the room, he turned and met Alyssa’s eyes, trying to ignore their soft almond shape and the long fringe of lashes.  “Let me make one thing very clear:  I am not going back to prison.  Ever.  I’ll die first.  You may not believe I’m dangerous, but I’m also not backed into a corner at the moment.  And you have a lot more to lose now.  I can either explain that five grand away after this is over and clear your name or throw your life to the sharks.  You choose.”

She held his gaze without responding, and he pulled her alongside him as he stepped out.

The motel was made up of two buildings, configured like an L.  Their room was on the short end of the bottom leg.  The office, closer to where the truck was parked, lay at the end of the longer section.

Despite the gray light of dawn, Teague kept to the shadows of the building, dragging Alyssa behind him.  As he traversed the corner where the two sections met, a door closed near the motel office.  Teague pushed Alyssa into the cover of an opening between the buildings, home to an icemaker and vending machine, and peered around the siding.  A woman shuffled to the edge of the parking lot, a bathrobe wrapped around her chubby figure, a cigarette between her fingers.  The office manager he’d managed to avoid when he’d picked up the coffee and newspaper earlier.

“Great,” he muttered.  “Right between us and the truck.”

Alyssa leaned into him to see around the corner.  “What is it?”

Her warm breath bathed his ear, slid down his neck.  He nudged her back to put more distance between them and shushed her.  Something wasn’t right.  He could feel it in the way his scalp tingled and his shoulders tightened.  That was a sixth sense he’d developed in prison, unlike his lame, struggling pyrokinetics that had been chemically burned into him in one terror-filled night.

He couldn’t chance walking right by the woman, so he waited and watched and listened.  And it seemed like forever as the manager continued to stare out at the parking lot, shifting her weight from one foot to the other, the cigarette taking quick trips to her lips.  In the distance, tires hummed on the asphalt, growing louder.  The hair on Teague’s neck prickled.

He scanned the length of the motel for another exit.  If they went around the back of the motel, maybe accessed the truck from the opposite direction…

The drone of a car engine brought his gaze back around to the parking lot.  A police cruiser pulled in and coasted toward the manager, who waved it down.

Teague gripped Alyssa’s hand and pulled her with him as he crossed the breezeway between buildings and peered out the other side.  The neighborhood beyond was barren, the only inhabited building within sight another shack-like hotel half a mile down the road.

Before he’d strategized a plan, another police car passed the hotel—this one with lights flashing, but no sirens.

“Fuck.”  Teague jumped back into the shadows and collided with Alyssa.  A cry of surprise and pain rumbled from her mouth.  Teague pressed her face into his shirt with a hand on the back of her head.

The click of another door drew Teague’s attention.  A man wandered out of his motel room with an ice bucket in one hand, the other rubbing at his eyes as if he’d just woken.  The man stopped and looked toward the parking lot, squinting at the red and blue flashing lights.

While he was distracted, Teague walked Alyssa back into the shadows alongside the vending machine.  Her face was still pressed into his chest.  Her breath, hot and fast against his tee shirt, filtered through the cotton and slid along his skin, making his mind blur around the edges, making him tighten his arms around her.

The other motel guest grumbled something unintelligible as his attention shifted from the cops back to the ice machine.  The sound of his feet dragging on the cement brought Alyssa’s focus around, her eyes wide with surprise.  And in the fraction of a second that followed, Teague realized that if he didn’t act fast, Alyssa would act faster.

Before she could speak, Teague put one hand under her chin, turned her face and covered her mouth with his.  She stiffened and squeaked, pushing at his chest.  The hand cuffed to Teague’s pulled hard against the restriction.  He tightened his grip on her face and pulled back just enough to murmur against her lips, “Kiss me back, Alyssa.  Please.  Don’t push me into a corner.”

He couldn’t read her expression in the shadows, but her mouth softened under his, her hand stopped tugging, her muscles released a level of tension.

Teague broke contact only long enough to mutter, “You ain’t botherin’ us.  Is he, baby?”

Before she had a chance to answer, Teague kissed her again, and not solely for the purpose of keeping her quiet.  He kissed her because he had to.  After feeling those lips against his, he had to feel them again.  And again.  Her mouth was warm and soft and supple.  And with each press of his mouth, hers relaxed.  Within seconds, she’d leaned into him, abandoning resistance.

Teague tightened the arm at her waist and pulled her closer until they were chest to chest, hips to hips.  He shifted, allowing her body to rub against his, allowing him to get a better feel of all her soft swells and lean muscle.

And that’s the moment she responded.  Her hips met his pressure.  Her mouth moved under his.  The hand at his chest gripped the fabric of his shirt, as if to keep him close.

The clatter of ice hitting a plastic bucket echoed in the small space.  “Did you see the cops out there, man?” the guy asked.  “Do you know what happened?”

Teague didn’t answer.  There was nothing that could make him pull away from Alyssa short of a cop holding a gun to his head, which he fully understood could happen at any moment.

The man’s voice seemed to nudge Alyssa from a trance.  She broke their kiss and looked up at Teague.  Her eyes glimmered in the dim light, heavy-lidded, filled with surprise and confusion and heat.

“Can’t you see I’m busy here?”  Teague didn’t have to fake the irritation in his voice.

The other man harrumphed and continued to fill the bucket.  Teague ran his thumb over Alyssa’s bottom lip and slid his palm to her jaw, his fingers into her hair.  He let his other hand drop to the low curve of her spine and pulled her hips against his again.  Fully erect, he indented the soft swell at the center of her pelvis.  She sucked in a breath, met his pressure, closed her eyes.

Teague’s mind hazed over.  Almost slid right out from under him.  His groin pulsed with heat.  His hands ached to roam.  He couldn’t stop himself when his mouth fell back to hers.  And she didn’t resist.  Her hand pressed against his face in the most endearing way as she tipped her head and opened to him.

The leash on his restraint snapped.  He kissed her back with a hunger that reflected all those dark, desperate years alone.  Years he thought he’d never feel a woman’s lips again.

Her hand slid over the back of his neck as she tilted her head a little more. Up and over his scalp as she teased her tongue into his mouth.  After an instant of shock, he accepted her invitation with a groan that felt as if it rumbled all the way from his feet.  Lost himself in the texture of her, the heat of her.  The sexy play she elicited with her lips, teeth, tongue was like unlocking a private playroom door, giving him a glimpse into the secrets she kept for a classified few.

And he liked the private disclosure of those secrets.  Really liked it.

Teague’s veins were filled with high octane, his body ready for a long, hot, steady burn followed by an intense, shattering explosion by the time the racket from the ice machine ceased and the man started back down the walkway.

“Might want to head back to your room,” he muttered.  “Cops’ll find any excuse to bust you.”

Alyssa pulled away in one sharp movement, leaving Teague dizzy with lust.  His heart beat double-time, his chest rocked with quick breaths, his muscles strained for action. And his brain was definitely focused on one thing, and one thing only.

Whoa.  He shook off the haze and peered around the side of the building toward the parking lot.  Only minutes had passed, but it felt as if he’d been floating in an alternate universe.

Lights swept over the parking lot as another vehicle pulled in.  But not a cop.  Teague forced his mind to clear.  Sharpened his attention on the man who emerged from the idling SUV and made his way to where the two cops stood talking to the woman.  An eerie trickle of familiarity cut at Teague’s belly.  Something about the way the man carried himself, the slant of his shoulders, the arrogant tilt of his head, but most of all, the stagger of his gait.  Not quite a limp, but definitely not right.

Teague had only met one man who’d walked that way and that man had no business showing up here.  Now.  Ever in Teague’s life, for that matter.  Not again.  Even the possibility threw Teague’s screwed-up world way the hell off kilter.  If it was him—Vasser, Teague would never forget that bastard’s name—then nothing was as it seemed, and Teague was fucked beyond imagination.

Vanessa, here.  *fanning herself*  I can’t wait to read this book!  And one of my lucky readers today will get that chance.  Joan is giving away a copy of Fever, in either print or digital (reader’s choice), to be delivered on Feb. 28.  Just tell me what kind of hero you’d like to be on the run with–sexy copy, dangerous bad boy–to have a chance to win the book.  And be sure to stop by Joan’s website for more info and pre-order links.