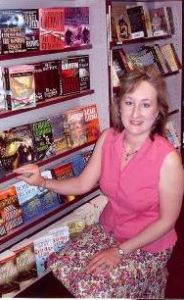 Hooray!  Catherine Kean is in the house!  Some of you already know that Catherine writes award-winning medieval historical romances that have garnered lots of accolades.  She also writes contemporary romances as Cate Lord, but that’s for another blog!  Let’s turn things over to Catherine now, to hear the latest on her lush and lovely historical romances.

When gathering ideas for my medieval romance A Knight’s Temptation, Book 3 of my Knight’s Series now available on Kindle, I was inspired in part by a gorgeous role model: Orlando Bloom, Legolas in the Lord of the Rings movies. My novel isn’t fantasy, and my hero Aldwin Treynarde isn’t an elf, but he does have long blond hair, is a fantastic fighter, and worships honor and justice. And yes, he’s a hottie!

I loved writing A Knight’s Temptation, and not just because I was able to further indulge my personal fascination with the Middle Ages (and spend time swooning over photos of Orlando Bloom). I adored my leading characters. There’s something really invigorating about writing scenes between a duty-driven alpha-male hero and a heroine who refuses to do as he expects. The push and tug between Aldwin and Lady Leona Ransley made for some pulse-pounding, sizzling, poignant, and downright funny scenes. There were times when sparks practically crackled across my keyboard. Whew! 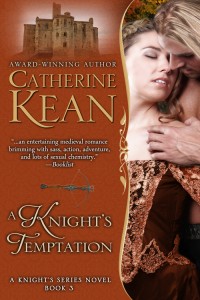 Aldwin is far from the naïve young squire readers first met in A Knight’s Vengeance (Series Book 1) He’s a hardened warrior who’s had to live with the dishonor of shooting Geoffrey de Lanceau with a crossbow bolt (from A Knight’s Vengeance). By succeeding in his important quest for de Lanceau—retrieving a stolen ruby pendant that de Lanceau’s enemies would sell to finance an uprising against him—Aldwin hopes to earn knighthood. Achieving that honor is his greatest temptation.

That is, until he meets my heroine, Leona Ransley. She’s far from the delicate, perfectly-mannered lady Aldwin idealized in his younger days. Risking her own safety, she snatched the pendant from her drunken father’s safekeeping at Pryerston Keep and arranged a meeting in a tavern to exchange the jewel for the reward. She’s very devoted to her father—but smart enough to know his guests, who gave him the pendant, are up to no good. Readers of A Knight’s Vengeance will be familiar with Baron Sedgewick and his wicked lover, Veronique, who have returned to Moydenshire to overthrow de Lanceau.

When Aldwin meets up with Leona to get the pendant, he doesn’t recognize her—although she definitely recalls him. Years ago, when they were children, he ordered her tied to a tree in a game of “rescue the damsel,” not realizing she was standing over a bees’ nest. Stung many times, Leona almost died. But she survived, and now, realizing her father and the good folk of Pryerston need her help to oust the conspirators, she’ll do all she can to ensure that happens, while being careful not to implicate her sire as a traitor.

Aldwin, however, senses she knows more about the pendant than she’s willing to admit. He takes her hostage, planning to deliver her to de Lanceau for questioning. Determined to escape, Leona refuses to cooperate. As I said, the sparks were a-crackling. Meanwhile, with Veronique and the baron trying to get back the pendant, the scenario makes for (I hope) one thrilling, page-turning, deliciously romantic adventure in the Middle Ages.

If you could pick any actor to be the hero of a medieval romance (besides yummy Orlando Bloom), who would you pick, and why? I’ll give away two Kindle copies of A Knight’s Vengeance, Book One of my Knight’s Series, to two different commenters. Vanessa has generously offered to give away a copy of her book My Favorite Countess as well.