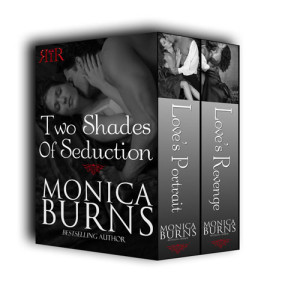 One of my favorite romance writers is the multi-award winning Monica Burns.  Monica writes emotional and very spicy historical and paranormal romance, and for the next week or so she’s running a fabulous 99 cent box set special.  The set contains two steamy, full-length historical romance novels featuring two men skilled in the ways of seduction and two heroines strong enough to resist them. They’re both rated 4 & 5 stars from RTBOOKreviews, Amazon readers and other review sites.

The box set at 99cents for a limited time only at the following retailers.

Coming soon to iTunes and Sony.

Book 1: Love’s Revenge
Firmly on the shelf at forty-one. Sophie accepts her life of servitude until she impulsively uses her father’s criminal activities to escape. But she never expected the Devil of Devlyn to accept her rash proposal, and she certainly hadn’t planned on falling in love with a younger man.

When Sophie Hamilton, the eldest daughter of his worst enemy shows up on the Earl of Devlyn’s doorstep with an unexpected offer, Devlyn seizes the chance for vengeance. What he doesn’t bargain on is how revenge could cost him the one thing he wants the most. Sophie’s love.

Book 2: Love’s Portrait
When Julia Westgard commissions a nude portrait of herself, the painting is much more than a rebellious act. It’s an attempt to regain her self-worth after years of a loveless, repressive marriage to her late husband. But the private portrait puts her directly in the path of Morgan St. Claire. A man who doesn’t take no for an answer.

From the moment Morgan sees Julia’s portrait, he’s determined to have her. But the woman he meets is a far cry from the image on canvas. What starts out as a simple exercise in seduction quickly evolves into a quest to reveal the true Julia. With each sensual encounter, he employs every weapon at his disposal in hopes of making Julia see she really is the woman in Love’s Portrait.

Seriously, folks, these are two wonderful books so hop on over to Amazon or B & N and pick up the boxed set.  Oh, and Monica will also be running a facebook party all week to celebrate the special so drop by and visit her!