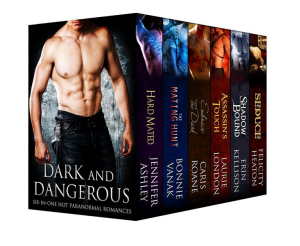 Boy, have I got a great deal for you today!  Three stories by fellow Rock*It Reads authors Bonnie Vanak, Laurie London, and Erin Kellison are featured in a new paranormal romance anthology that also includes other fantastic authors like USA Today Bestseller Jennifer Ashley.  Even more exciting, this collection is now on sale for ONLY 99 cents!  Trust me – I’ve already downloaded my own copy.

Here are some of the stories included in this anthology:

THE MATING HUNT by Bonnie Vanak
After a childhood trauma left Arianna Sanders terrified of sex, the only man the pretty Lupine werewolf desires is her fiercely protective guardian. But the sexy, mysterious shifter harbors a dark secret, one he’s determined to hide from Arianna.

Kyle Morgan hungers for the voluptuous Arianna and dreams of consummating the passion smoldering between them. When he’s forced into mating with her to save her life, he must tame the savage, sexual beast inside him before taking the virgin he’s vowed to protect from those hungering to claim her, including himself…

Former fashion designer Neyla Trihorn had the perfect life until a deadly accident revealed her latent para-abilities–now she’s the army’s hottest asset in their fight against invaders. Rickert D’Angelus, the dangerously sexy assassin from Cascadia, leads a group of warriors into New Seattle to stop enemy soldiers from finding the Iron Portal into his world.

When he captures the beautiful Protection-Talent, a passionate vision appears and stirs something deep inside him. Rickert must decide if it’s a Talent trick, designed to foil the enemy…or the answer to his deepest desires.

Adam Thorne founded the Segue Institute to study and destroy his monster of a brother, but the key to its success is held in the pale, slender hand of a woman on the run. There is something hauntingly different about Talia O’Brien, her unknowing sensuality, her uncanny way of slipping into Shadow. Twilight is the place between life and what comes after–a dark forest of fantasy, filled with beauty, peril, mystery. And Talia is about to open the door.

HARD MATED by Jennifer Ashley
Spike, a wildcat Shifter and the champion fighter of Shiftertown, is stunned when Myka, the best friend of a dying human woman, announces that Spike has fathered a cub. What’s more, the mother is giving the boy to Spike to protect and raise.

Spike is torn between the cub and his duties as tracker to the Shiftertown leader, and begs sassy and sexy horse-training Myka, the only person who understands, to help him. When Spike’s job puts his cub and Myka in danger, Spike is forced to choose between those to whom he’s pledged his loyalty and his need to protect the woman and cub he’s come to love.

Wow!  What a great collection, and there are two other stories contained in this anthology as well.  If you love sexy paranormal romance, you really shouldn’t let this deal pass you by.  You can find Dark And Dangerous on Amazon, B & N, Kobo, and most e-retailers.