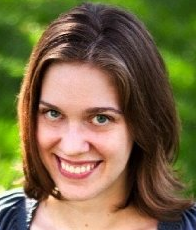 I’m doing something really fun today – an excerpt and ARC exchange with my fellow Kensington Zebra author, Theresa Romain.  You see, we both write Regency-set historical romance and we both have Christmas-themed books coming out on Oct. 2.  So we thought it would be fun to post some exclusive excerpts and also give our readers a chance to win Advanced Reader Copies of our books.  Just think, you have the chance to read either His Mistletoe Bride or Season for Surrender two months before anyone else!

And now for the good stuff – an excerpt from Theresa’s truly lovely book, Season for Surrender. 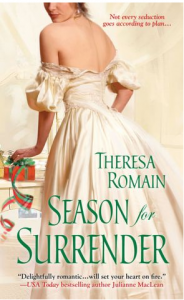 When Alexander, Lord Xavier, hosts a country house party, he never expects his own reputation will come into question. For years, the ton has known him as a scandalous rogue, always up for a naughty wager. So what could possibly go wrong?

Well. His cousin forces a wager that Xavier can’t get a proper bluestocking, Louisa, to stay for the length of the house party. Louisa has every reason to hate Xavier, but she’s intrigued by his home’s fine library—and by the chance to mix with the impolite sector of the polite world.

In this early scene, Louisa has begun to suspect that her host’s reputation is a façade. What does it hide, though? When he finds her in the library, she’s willing to forge a truce so she can find out more.

“Are you suggesting I’ve been difficult?” Again, the expression of elaborate shock.

Louisa mirrored his posture, folding her arms. “Come now, my lord. I’ve promised not to be shrewish with you, so you can’t expect me to pick up that thread of conversation. I’m only asking you to treat me with the same respect you would one of your male associates.”

Gray eyes met hers. “They rarely wear such fetching frocks, Miss Oliver. I would find the pretense difficult to sustain.”

She shook her head. “Honesty, please, my lord. You don’t have to say things like fetching to me. I’m not going to leave if I’m not complimented every two minutes. In fact, I’d much rather receive no compliment at all than an insincere one.”

She gestured at her patterned muslin day dress. “This is clothing, my lord. It covers my body. It doesn’t have anything to do with my real self.”

When he studied her without replying, she made an impatient gesture and laid the play on the nearest shelf. “Excuse me, please.”

She crouched again, intending to continue her survey of this long-neglected collection of books. Determined to ignore the tall man lurking behind her, she scrutinized the bindings for some clue as to where to begin. The old, cord-banded spines on this shelf were not marked. Anything could be here, waiting to surprise her.

Xavier loomed over her, and the hair at the nape of her neck stirred in the eddy of his slight movements. Then he sank to the floor, leaning against the very shelf she was looking at, and stretched out his long legs.

“You’re wrong, Miss Oliver. When you choose your clothing, you do reveal something about yourself.”

He looked at her aslant. “Your gown is simple, yet it follows fashion. This shows that you care about practicality but do not wish to do yourself a disservice by appearing a frump. In the same way, your hair is coiled back from your face, yet its twists have been carefully arranged. In your every choice, you balance the demands of the world with the demands of your own self.”

Louisa sank from her crouch to a seat on the floor, an arm’s length away. “Oh.” She stopped; shook her head. “Thank you?”

She smoothed her skirt, wondering at all he’d read into the floral-patterned fabric. One hand reached up to touch her hair, as though it had altered when spoken of. “I’d never thought of it all that way. You surprise me, my lord.”

He lifted his chin and looked at her directly. “Likewise. Please, Miss Oliver, don’t assume that every compliment I give is insincere. I might candy my words, but they do have real substance.” His expression turned wry. “Well, sometimes they do.”

A knot of something tense between her shoulders began to relax. “That’s more than many in the ton could say. Certainly more than most would admit.”

She leaned against the shelf next to him, feeling an odd tug of companionship. It came from the informality, maybe; sitting not on furniture with her back straight as a yardstick, but on the floor, her legs folded up like a child’s.

There was nothing improper, exactly, about sitting like this, yet she felt as though she’d left propriety behind her at long last. She sat close enough to the infamous Lord Xavier to breathe in his clean scents of starch and spice; close enough to judge the span of his biceps beneath his coat. Would her two hands meet around it? She felt an almost irresistible urge to try, to wrap her fingers around some part of him and clutch this moment close.

HONOR AMONG ROGUES
Alexander Edgware, Lord Xavier, has quite a reputation—for daring, wagering, and wickedness in all its delightful forms. But the wager before him is hardly his preferred sport: Xavier must persuade a proper young lady to attend his famously naughty Christmas house party—and stay the full, ruinous two weeks. Worse, the lady is Louisa Oliver, a doe-eyed bookworm Xavier finds quite charming. Yet to refuse the challenge is impossible—he will simply have to appoint himself Miss Oliver’s protector…

MISCHIEF AMONG MISSES
Louisa knows her chance for a husband has passed. But she has no desire to retire into spinsterhood without enjoying a few grand adventures first. When Lord Xavier’s invitation arrives, Louisa is more intrigued than insulted. And once inside the rogues’ gallery, she just may have a thing or two to teach her gentlemen friends about daring…

Vanessa, here.  Didn’t that excerpt whet your appetite?  I had the pleasure of reading Season for Surrender a few weeks ago and I just loved it.  It’s witty and warm, with a wonderful hero and a smart and appealing heroine.  Theresa is a very talented writer and the person who wins this ARC will be very lucky!  So, for a chance to win the ARC Season for Surrender, just leave me a comment about something you really look forward to during the holiday season.  Yeah, it’s the middle of summer, but let’s spread a little holiday cheer a few months early!

The ARC contest on my blog will be open until August 8.  And don’t forget to check out Theresa’s blog and her website for the excerpt from my book, His Mistletoe Bride, and for a chance to win the ARC!

71 thoughts on “ARC Giveaway of Season For Surrender!”