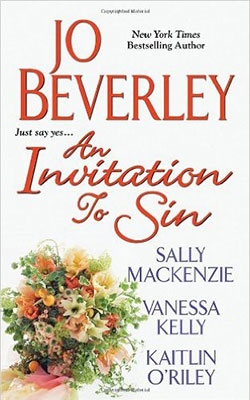 Clarissa resisted the impulse to lick her parched lips. She would die before she would let Christian see the extent of her nervousness.

“You must be very happy to see your family again,” she said brightly.

His eyes grew dark and knowing as he gave her an appraising inspection. Heat danced across her skin when his gaze fell to her bosom, swelling almost indecently over the edge of her low-cut bodice.

Clarissa bit her lip, trying not to breathe too heavily as she cursed Lillian for persuading her to wear such a scandalous gown. What must Christian think of her?

His next statement made the answer crystal clear.

“There are others I’m just as happy to see,” he murmured in a husky voice. “One of those I’d like to spend a great deal of time with. Alone, if possible.”

She stifled a gasp. Was Christian actually flirting with her? How could that be possible?

Dumbfounded, she took in the wicked gleam in his eyes and the seductive curve of his mouth. Her mind tried desperately to refute what she sensed with every fiber of her being.

But her mind failed. Christian was flirting with her. Even worse, she feared he was trying to seduce her. Why, she couldn’t begin to fathom. But what she could fathom was that it scared her half to death—for more reasons than she could count, starting with the fact that he was a soldier. She had vowed never to love another soldier.

Not to mention the fact that Christian was five years her junior.

“Well, Clarissa,” he purred. “What do you think? Would you like to spend some time with me, starting with the next dance?”

He moved then, pushing away from the wall to close the distance between them. He loomed over her, forcing her to tilt her head back to look into his face.

Clarissa sucked in a startled breath, both terrified and fascinated by the blatant invitation in his eyes. It made her legs tremble and her body grow weak. His gloved hand moved down the bare flesh of her arm, trailing shivers in its wake. He took her hand in a gentle clasp, weaving their fingers together.

She let out a sigh—almost a whimper—as some part of her addled brain urged her to give in. To lean into his big, hard body and allow him to sweep her away. He made her feel alive again, full of sparkling energy and heat. Part of her welcomed it with a burning need to escape the cold that had wrapped itself around her heart and soul for so long.

Almost without thought, she returned the pressure of his hand. He smiled, his eyes flaring with something like triumph. His hand closed around hers, hard and possessive.

With a thump, Clarissa fell to earth. A thousand voices in her head urged her to flee before she made an even bigger fool of herself. Christian had no business treating her this way. Like a woman to be desired, not a widow sworn never to love again.

She snatched her hand away. “You must forgive me. I promised Lillian I would help her with something.”

He frowned, puzzlement chasing away some of the heat in his eyes.

“I’m sure Lillian would prefer you to stay here and enjoy yourself. I will be glad to provide any excuse you need to avert her irritation.”

That was exactly what she was afraid of.

“That won’t be necessary,” she said, backing away from him.

She bumped into a stout dowager, who promptly dropped her fan. Rolling his eyes, Christian scooped it up and handed it back to the protesting matron. Clarissa seized the opportunity to escape into the crush of guests.

As she wove her way to the door, she chanced a glance back in Christian’s direction. He stood where she had left him, hands on his lean hips, his stern gaze locked onto her across the room. She froze like a rabbit before a fox, and his mobile eyebrows lifted in enquiry. Then he gave her a slow, satisfied curve of the lips.

With that, she turned and fled. But a quiet, inner voice whispered that whatever his game was, Christian would not let her escape so easily the next time.