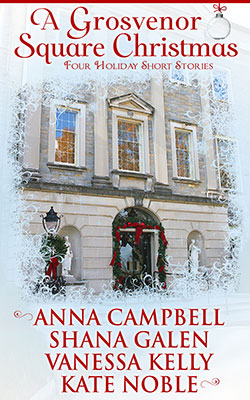 “Good God, simply tell the girl how you feel,” Silverton advised, clearly exasperated. “You cannot spend your life brooding about her behind marble pillars and potted plants. It’s undignified.”

Nigel Dash raised his eyebrows with incredulous disdain before realizing there were two problems with that unspoken response. The first was that no one could affect disdain better than the Marquess of Silverton. The second was that his best friend was right. When it came to Miss Amelia Easton, Nigel’s behavior was undignified.

That, however, was not a conversation Nigel intended to have, so he added in the politely sardonic voice he’d perfected years ago, “What a load of rot, old man. Been dipping into the champagne punch again, have you?”

“It’s swill because she always invites too many people,” Nigel said, glancing around the packed ballroom. “She waters the bloody stuff down. You’d think Lord Framingham would know better, but he’s a nip-farthing if there ever was one.”

“Forget the punch. You need to do something about Miss Easton and you need to do it soon, or else you’ll miss your chance.”

Nigel scowled, resisting Silverton’s efforts to back him into a corner. Most days, he did his best not to think about Amelia, much less give the impression he was paying her any sort of extraordinary attention. “It’s beyond me why you’re making such ill-judged assumptions about my feelings toward Miss Easton. She’s simply a…a…”

At a loss to describe the exact nature of his relationship with Amelia, Nigel trailed off. Almost unconsciously, his gaze shifted across the immense ballroom to fasten on the girl, inexorably pulled to her like metal filings to a magnet. He could barely make her out since she was surrounded by her usual jostling court of ardent admirers, most of them titled, wealthy, and considerably handsomer than Nigel.

If he was honest with himself, he’d have to admit that obsession would be the most accurate description of his feelings, and he hadn’t the slightest notion as to when or how that obsession had developed. However it had happened, over the last several months a ridiculous amount of space in his skull had been taken up by thoughts of lovely Amelia Easton.

Fortunately, until now, none of his acquaintances had suspected that he—the most sensible man in the ton—had succumbed to such a maudlin, hopeless passion. A hopeless passion, since Amelia Easton would no sooner marry a man like Nigel than she would a butcher from Smithfield. After all, she was widely acknowledged as one of the great prizes on the matrimonial mart—beautiful, kind, good-natured, and disgustingly rich, or at least her father was. It was a most potent combination, and meant that the girl couldn’t step foot outside her family’s Mayfair townhouse without a pack of slavering bachelors in pursuit.

“How did you figure it out?” he asked Silverton. “I haven’t said a word to a soul, and I’ve been damn careful around Miss Easton, too.”

The very idea that she might discover his weakness for her made his blood run cold. Amelia was a sweet girl, but she’d surely burst into laughter at the idea of dependable and boring Nigel Dash falling in love with the most sought-after girl in London.

Silverton propped his broad shoulders against one of the marble pillars that ringed Lady Framingham’s stiflingly hot ballroom. Nigel had never been one to envy his friends, no matter how wealthy, titled, or handsome. He came from an old and distinguished family and had enough money to last him ten lifetimes. More importantly, he was wealthy in friends, and had a mother and sister—both of them bang-up to the mark—who were devoted to him. He’d never had any cause for envy or complaint.

Until a few months ago, anyway, when he realized he was hopelessly smitten with Amelia.

Silverton gave him a sheepish smile. “It wasn’t me who deduced your feelings. It was Meredith.”

Nigel didn’t know whether to be resigned or appalled, but after a moment’s consideration he decided the latter best summed up his reaction. “I beg you to tell me that your esteemed wife has not shared her insights with anyone else.”

“Of course not, but we’re both mystified that you’re holding back. Miss Easton is clearly still available. Not only has she been out for several Seasons, she’s cried off from two engagements with two exceedingly eligible suitors. The field would thus appear to be wide open. And, Nigel, it’s long past time you got married,” Silverton added with the annoying complacency of a happily married man. “You’re thirty-four already.”

“Not until next month. And may I remind you that you were the same advanced age when you married Meredith.”

“I was simply waiting for the right woman.”

“Don’t hold out too long, old man.” As the orchestra struck up a waltz, Silverton’s aristocratic features grew thoughtful. “Besides, I think you have found the right girl. Miss Easton’s temperament would suit yours quite well, I believe.”

Nigel agreed but, feeling more ill-tempered by the moment, he turned toward the dance floor with a good idea of what he would see—Amelia led into the waltz by one of her apparently endless stream of swains. This time it was Lord Broadmore, the man everyone regarded as the current favorite in the Amelia sweepstakes. The arrogant lord’s possessive demeanor as he guided her into the first turn of the waltz told Nigel that Broadmore believed he was Amelia’s favorite, too. And why not? He was rich, handsome, and heir to the Marquess of Lovering. Just the sort of fellow Amelia would no doubt wish to marry.

“Blast it, Silverton, just look at the collection of suitors she’s got trailing after her, especially Broadmore.” Nigel gloomily watched the broad-shouldered Corinthian sweep Amelia gracefully down the room. “What girl wouldn’t want to be romanced by someone who looks like bloody Prince Charming?”

Silverton frowned. “And you’re what? The frog on the lily pad?”

“Hardly, but I can’t compete with Broadmore. He’s got every girl in town half in love with him already. Why not Amelia?”

“Because Broadmore’s an arrogant ass. Do you really want Miss Easton spending the rest of her life with him? You’d be doing the poor girl a service by stealing him a march.”

Nigel had never looked at it that way before. Broadmore was an arrogant ass, one who had a great deal more bottom than brains.

Not that Amelia seemed to think so. As she and Broadmore spun past him, her light-hearted laugh drifted behind her, shimmering like fairy dust in the air.

“I see your point,” Nigel replied. “But Amelia doesn’t seem the least bit bothered by Broadmore’s character defects.” He tried to ignore the way his heart twisted into a hard knot at the thought of Amelia married to another man.

Silverton snorted. “Don’t bet on it. Miss Easton is polite to everyone, including asses like Broadmore. Besides, I understand her parents are doing their best to promote the match. I suspect Miss Easton is reluctant to disappoint them, given the unfortunate gossip surrounding her failed engagements.”

Many in the ton had labeled Amelia both a jilt and a flirt for crying off, unfair labels that infuriated Nigel. Amelia was no flirt, but a kind person who was too accommodating by half. Neither of the men she’d ultimately rejected had been good enough for her, and Nigel had applauded her courage in breaking the engagements. “If Miss Easton’s parents support the match it’s bloody unlikely she’ll go against their wishes.”

Silverton dismissed that objection with the wave of a hand. “First of all, if I were a girl I’d much rather marry you than Broadmore—”

“Yes, well, you’re obviously not a girl, so your opinion on the matter is rather suspect.”

“And,” Silverton said, ignoring the interruption, “you’re also one of the richest men in England. Parents love to marry their daughters off to men like you.”

Nigel simply grunted. He hated talking about money, but Silverton was correct. Despite the ton’s general impression that his family lived in a respectable but fairly modest style, they were, in fact, disgustingly rich. His father had invested his small, inherited fortune with great care and to good effect, and Nigel’s efforts in the years since the old fellow’s death had been nothing short of spectacular.

“That’s all well and good, but Sir Mitchell and his wife are aiming for a title for Amelia,” he pointed out. “They’ve always been ambitious in that regard.”

Silverton scoffed. “Miss Easton never struck me as a girl dangling after a title.”

Nigel glanced at Amelia again, being led off the floor by Broadmore. Her cheeks were brightly flushed and a tiny frown marked her normally clear brow. She looked hot and out of sorts, and a moment later snapped open her fan to apply it with vigorous effect. When Broadmore filched the dainty little frippery from her hand with a laugh and started to languidly fan her, Nigel thought she struggled to maintain a pleasant expression.

“Well, Nigel?” Silverton’s sardonic tone drew him back to the conversation.

“You’re right in that I wouldn’t expect Miss Easton to hold the lack of a title against a fellow, but she doesn’t think about me as a…prospective suitor.” Nigel paused, forcing himself to accept the grim reality. “She sees me only as a friend.”

And that had been the story of Nigel’s life. He was everyone’s easy-going friend, and the perfect man to chat with old ladies or put shy debs at their ease. The best man to smooth over awkward moments, soothe flustered spinsters, or joke scowling dowagers out of a pet. And, normally, Nigel didn’t mind that role. He enjoyed lending a hand when needed and genuinely liked talking to people—all sorts of people, even the grumpiest of old dowagers.

He was, quite simply, good, old Nigel Dash, the most dependable man in the ton, but certainly not a dashing suitor—a true irony, given his name. In the eyes of most young ladies—including Amelia Easton, he suspected—dependable was only a short step away from boring.